Pat Robertson: Church/State Separation Groups Pick on Christians Because of the Devil

Here’s an accusation I’ve heard from a lot of Christian websites and organizations, not to mention my own inbox: Why do atheists pick on Christians so much?

If we really oppose religion, shouldn’t we be going after Hindus and Buddhists, too? How come we rarely hear about those stories?

The answer is really, really simple. Christians in the U.S. have all the political power. When we’re talking about opposing civil rights or violating the principle of church/state separation, it’s almost inevitable that Christians are at the root of the problem.

To put it another way, I’m not worried about Bahá’ís, even if I think their beliefs are wrong.

So when a viewer asked Pat Robertson a version of this question on The 700 Club, do you think he responded with the same obvious answer? 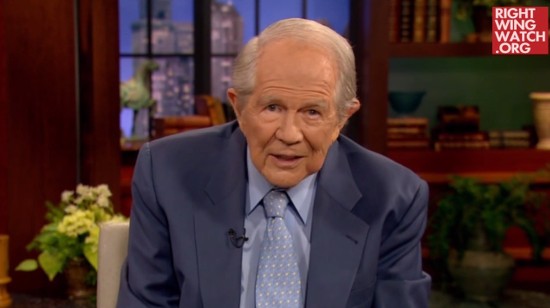 Robertson said atheists go after Christians because atheists hate God and understand that Christianity is the One True Faith.

“They fight against Christianity because Christianity touches the souls of people and the devil regards Christianity as a threat, and of course it is a threat because we’re going to overturn him and his kingdom.”

By the way: The ACLU defends Christians all the time. And FFRF, which is undoubtedly an atheist advocacy group (unlike the ACLU), has opposed non-Christian religions, too. Here’s FFRF attorney Andrew Seidel offering plenty of examples:

[FOX News’ Todd] Starnes ignores the complaint we filed against the Muslim college professor promoting his religion in the classroom. FFRF sent out a press release on this, complete with audio clips and PowerPoint slides, to Starnes’ Fox News buddies, but nobody at the network reported on it. (So we can turn around and ask a similar question of Starnes: Why didn’t you cover FFRF’s complaint?)

We have also protested a Buddhist shrine on public land in California. We have sent letters to the mayors of Philadelphia and Dallas for hosting Iftar events to honor Ramadan and, just this week, to public libraries that plan on closing for the Dalai Lama. FFRF Co-President Dan Barker has debated several Muslims.

Christians like Robertson and Starnes never point out these cases because it defeats their narrative (and, apparently, because it’s too hard to Google things). Needless to say, they’re flat-out wrong to think atheists go after them for any reason other than Christians are the ones causing nearly all of the church/state separation problems.

July 12, 2016
Are You a Gay Man? Marry a Woman Anyway, Some Christians Say
Next Post

July 12, 2016 The Significance of Atheism, As Explained by George H. Smith
"In a Kroger in Ohio? Wow, poor Wall!"
sneakiki Robert Jeffress: There’s “No Credible Religious ..."
"Not just Utah, but also (in alphabetical order):*Alabama*Arkansas*Florida*Georgia*Kentucky*Louisiana*Mississippi*Missouri*North Carolina*Oklahoma*South Carolina*Tennessee*Texas*Virginia*West VirginiaAnd in gay adult entertainment ..."
NOGODZ20 Christian Apologist: Black People Weren’t Raised ..."
"I think Hillsong's edict goes something like "Never serve a wine that's older than your ..."
James A. North 60 Minutes Australia Exposes More Assault ..."
"I prefer him and Robin like this https://uploads.disquscdn.c... https://uploads.disquscdn.c..."
Rob P 60 Minutes Australia Exposes More Assault ..."
Browse Our Archives
What Are Your Thoughts?leave a comment