In a completely ignorant video from Mitch Stokes, the philosopher/author of How to Be an Atheist (an anti-atheist book), he poses a couple of rhetorical questions to Richard Dawkins.

Both questions are very easy to answer, and both suggest Stokes has never spoken to an atheist, much less has any credibility to write a book about the subject. 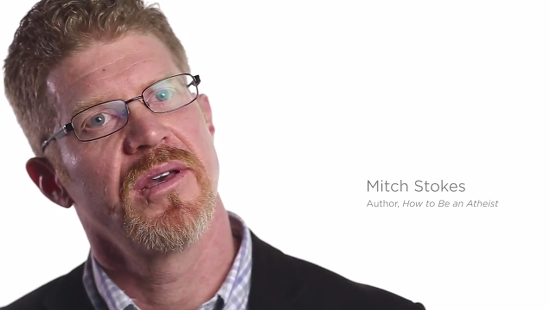 It would probably be: So what? I mean, what’s the point? Why… why do you care so much? And why should I?… I just want to know what drives these guys.

(Google. It’s called Google. How hard is it to use goddamn Google?)

Since he’s too lazy to do any research, I’ll do the work for him.

Atheists don’t really care that you believe in what we consider bullshit.

All in the name of God’s love, of course.

If you care about critical thinking, science education, and evidence-based public policies, then you better be speaking out against religion.

Once again, if Stokes did any research, he would know that Dawkins spent an entire chapter of The God Delusion discussing the issue of morality.

Stokes is one of these people who thinks the only reason we have morality is because God says some things are good and others are not. Resting on the Sabbath is good. Mixing wool and linen is bad. Killing homosexuals is good. Worshiping a false idol is bad. (If you don’t agree with all that, good. It’s because you’re more moral than the biblical God.)

It’s a damn good thing Stokes thinks God exists since he’d otherwise be running around killing everyone in sight. The only thing preventing him from mass genocide, I guess, is his belief that God is looking over his shoulders.

He says near the end of the video that Christopher Hitchens had a response to this argument:

When Christopher Hitchens was alive, he would constantly get asked, “Well, how do you account for morality?” And he would say the solidarity of humanity. He’s way too smart for that. And he would avoid the real question, that’s like, well, says who?

That’s… a perfectly legitimate, scientifically-supported answer from Hitch. We have a better chance of surviving as a species if we work together. The Golden Rule is an excellent principle to live by.

You don’t need God to tell you to treat people well — and if you do, there’s something seriously wrong with you.

It’s not always clear-cut, obviously. Abortion rights for some is seen as murder to others — just to offer one example — and these are debates we’ll continue to have. But human morality was around long before modern religions came into being, and they’ll be around long after today’s faiths turn into ancient mythology.

If this video is supposed to be a commercial for his book, I don’t get it. Outside of Donald Trump, showcasing how little you understand about topics you claim to know so much about isn’t a formula for success.

July 12, 2016
Tony Perkins Gets Republicans to Consider Anti-Gay Conversion Therapy in the Party Platform
Next Post