Meet the “Mama Dragons”: Mormon Moms Protecting Their LGBT Kids From Within The Church

We’ve covered the topic of suicide in Mormon communities before, especially the high numbers of LGBT youth affected. But there’s another side that doesn’t get as much coverage: the supportive Mormon parents who are protecting their LGBT children from the church’s toxic environment. 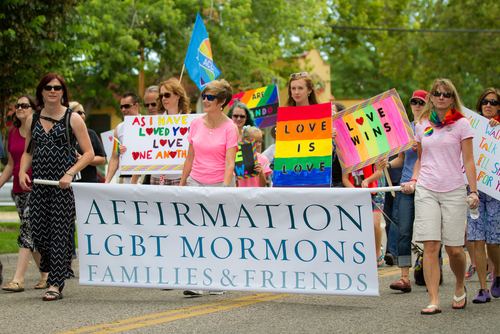 In a recent clip for NPR’s Morning Edition, reporter Andrea Smardon spoke to Wendy Montgomery, one of a collective of self-proclaimed “Mama Dragons.” The Mama Dragons are a sort of watchdog group that keeps an eye on LGBT youth in the community who may be at risk of suicide, likely related to the church’s strong anti-LGBT stance.

The full transcript of the piece is here, and it details the ways that the moms reach out to kids in need.

SMARDON: Montgomery says the Mama Dragons have grown from a small support group a few years ago to 900 strong.

MONTGOMERY: We are working pretty much 24/7, around the clock, trying to reach the kids we hear about that are the most desperate and the most suicidal. And we can’t get to all of them.

According to the report, youth suicide rates have more than doubled over the last 10 years. While it’s difficult to get accurate data on what drives young people to suicide, the trend coincides with more outspoken church decrees against homosexuality.

Montgomery has spoken at length about her own gay child; there was even a documentary produced about her family’s journey to accepting her son. But even with all the work she’s done, there seems to be one big, lingering question: why not just take her family out of the LDS church?

Here’s how she answered that question in a column for the Huffington Post last year:

So, our son has stepped away from the Church, with our blessing. He is emotionally and spiritually safer with distance. I am still an active and practicing Mormon, despite the myriad of unanswered questions I have. Many ask why I stay.

I stay so other gay people, especially youth, know they have a friend sitting there with them. In the past three years, I have met hundreds of LGBT Mormons. I have wept with them as I hear their stories that are becoming all too familiar: Their pain of being seen by their families as less than; often viewed as the other, as sinful, or told that they are an abomination. Many have been cast aside and thrown out of their homes and congregations. These sweet gay children are often the most vulnerable among us, and instead of binding them up, we wound them more deeply — often in irreparable ways.

These wounds drive many to the brink of suicide, like my son. We need to be better at loving and supporting them. Simple tolerance is not enough — we need to celebrate who our children are, including their beauty and diversity.

I stay so other parents might have a positive example of how to love, accept and support their gay child, instead of succumbing to the morass of misinformation on LGBT people inside the faith, and end up shunning and rejecting them. I stay because even with all of this, this is still my church, too. I stay because I see God in my work as an LGBT ally, and as I advocate that all voices be heard. I stay because in my heart I believe that, despite its flaws, the church is a vehicle leading me toward Jesus Christ.

It’s clearer than ever that LGBT kids from religious families need our support, and that Mormon youth in particular face truly difficult hardships in reconciling faith, family, and identity. The simple answer might be to leave the church, but for some, it’s not actually that simple. Young people may not have the independence or resources required to leave communities that are harmful to them; in the meantime, the Mama Dragons are here to help.

July 11, 2016 Snellville (GA) Police Department: We Should Live Under the "Rules of Law of God"
Browse Our Archives
What Are Your Thoughts?leave a comment