Does Donald Trump Agree With Anti-LGBT Religious Leaders or Not? July 11, 2016 Camille Beredjick

Does Donald Trump Agree With Anti-LGBT Religious Leaders or Not?

The Republican National Convention is looming closer and closer, and so, too, is Donald Trump‘s presumptive acceptance of the GOP nomination.

While Trump has proven without a doubt that he’s racist, sexist, anti-Muslim, anti-Semitic and xenophobic, Americans can’t seem to decide if he’s homophobic and transphobic. And neither can he. 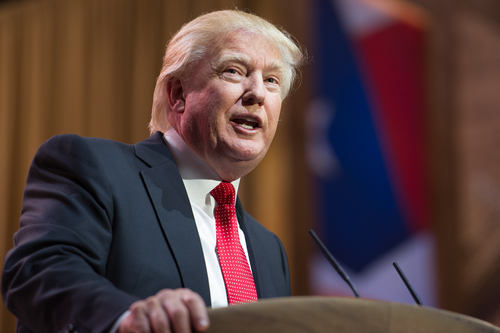 The answer seems clear to many of us: of course he is. He recently met with some of the most anti-LGBT leaders from the religious right movement:

He huddled last month at a Manhattan hotel with hundreds of religious conservatives, many of them — like James C. Dobson, the founder of Focus on the Family, and Tony Perkins, the president of the Family Research Council — outspoken opponents of new legal protections for gay and transgender people.

He promised to overturn marriage equality:

Donald Trump supports the so-called “First Amendment Defense Act,” (FADA), a bill to enable Kim Davis-style discrimination against LGBT people nationwide. FADA would undermine the rule of law and promote taxpayer-funded discrimination against same-sex couples. In a letter to the far-right organization the American Principles Project, Trump wrote in December, “If Congress considers the First Amendment Defense Act a priority, then I will do all I can to make sure it comes to my desk for signatures and enactment.”

FADA would allow organizations and businesses contracting with the federal government to circumvent critical federal protections designed to protect same-sex couples and their families from harmful discrimination. It would also enable federal employees to refuse to fully perform their duties if they believe they conflict with their objection to same-sex marriage. For example, an employee at the Department of Veterans Affairs could refuse to process a claim for survivor benefits for the same-sex spouse of a servicemember.

Republicans themselves are torn over how anti-LGBT to make their official platform. Marriage equality is a done deal, so they’ve nearly given up there, but what about transgender people using affirming bathrooms? What about banning non-discrimination protections for LGBT people?

Well, some people want to go all out in blasting LGBT folks:

The draft circulating Sunday night condemned the Obama administration’s effort to deny funding to states that prohibit transgender people from using the bathroom that aligns with their gender identity, accusing the administration of trying to impose a cultural revolution. “They are determined to reshape our schools — and our entire society — to fit the mold of an ideology alien to America’s history,” the draft reads. Another section criticizes those who boycott businesses that deny services to same-sex couples.

And others are in favor of a more moderate stance:

Paul E. Singer, a billionaire Republican who has financed gay rights battles across the country, is now funding an effort to write into the platform language more inclusive of gays, lesbians and transgender people.

The goal of his group, the American Unity Fund, is not to get the party to endorse same-sex marriage but to add a more open-ended statement that commits the party “to respect for all families,” though there is still fierce resistance from the right.

His track record is all over the place, and apparently his strategy with regards to LGBT issues in the election is to run and hide:

He has recently started insisting that he would be a better friend to the gay community than Mrs. Clinton, even though he opposes legal rights like marriage.

But as he tries to convince social conservatives that he is not acting as a moderate, Mr. Trump has been largely hands-off with the platform.

“His guys have not shown up and said, ‘Change this, change that,’” David Barton, a platform committee member from Texas, said.

The big question, then, is why Trump would even bother to meet with such staunchly homophobic religious leaders if he wouldn’t also own up to agreeing with them. These are not the religious people who would remotely support working together on social or political issues; they barely even represent the majority of religious people. But those are the people he chose to meet with, and now he won’t go on the record to talk about it. (Tony Perkins, on the other hand, says Trump would be a good leader for LGBT people, but only because he’ll apparently protect them from terrorist attacks.)

This is just another slice of the disaster that is the Trump campaign. It’s time we add homophobia and transphobia to his list of un-qualifications once and for all.