Normally when we hear about conservative businesses rejecting LGBT people’s orders, it’s because they’ve been asked to provide supplies for a same-sex wedding that they say is against their religious beliefs.

In this case, though, a baker in Ohio rejected a customer’s order for a simple birthday cake only after snooping on the customer’s Facebook page and learning that she’s married to another woman. 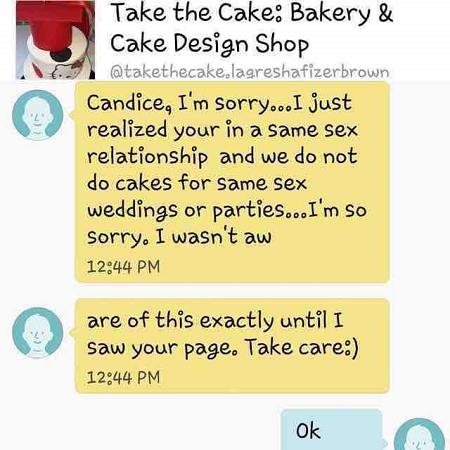 Candice Lowe had ordered a birthday cake for her wife, Amanda, from Take the Cake Bakery in Toledo. Then she received a text message from LeGresha Fizer-Brown, the owner, canceling her order. Fizer-Brown had looked Lowe up on Facebook and learned that way that her customer was in a same-sex relationship.

“Candice, I’m sorry… I just realized your [sic] in a same sex relationship and we do not do cakes for same sex weddings or parties…I’m so sorry. I wasn’t aware of this exactly until I saw your page. Take care:)”

Lowe received the text while she was on her honeymoon, of all places, and she and her new wife were rightfully devastated.

The Lowes, who were married just two weeks ago, said they “just wanted to cry” when they received the text. Candice Lowe later posted the alleged message to her Facebook page, and a screenshot appears on the progressive news site, Peacock Panache.

Bakeries and other wedding-related venues have become an unlikely battleground for LGBT rights in recent years, with owners often citing their religious beliefs in turning away same-sex couples seeking cakes and other services. Still, this may be the first case in recent memory where such a flap has erupted over a birthday, as opposed to a wedding, cake.

“A birthday cake has nothing to do with your sexual preference,” Candice Lowe told ABC 13. “Are you saying that, since we’re gay, we can’t eat cake?”

“Religious freedom” bills around the country seek to make this kind of discrimination legal, but it might not fly in this particular city. While there is no statewide law in Ohio protecting LGBT people from discrimination, Toledo is one of the cities in Ohio where these protections do exist. That means bad news for the bakery if Lowe takes legal action.

The Huffington Post’s attempts to reach the Take the Cake Bakery via the phone number listed on its Facebook page were unsuccessful and Fizer-Brown reportedly did not respond to requests for comment by ABC 13, NBC 24 and Peacock Panache.

Candice Lowe told NBC 24 that she’s ordered a cake for Amanda from a different bakery, but hopes that Fizer-Brown will learn from the experience.

I guess discrimination is acceptable if you end it with a smiley face.

July 11, 2016
A Former Employee Took Over a Bakery's Facebook Page to Expose the Owners' Faith-Based Racism
Next Post