If you were to visit the website for the Blue Blinds Bakery in Plymouth, Massachusetts, you’d think it’s a quaint little place. Hardly the center of controversy. But on the site’s “About” page, there’s a passing reference to its owners and their beliefs: 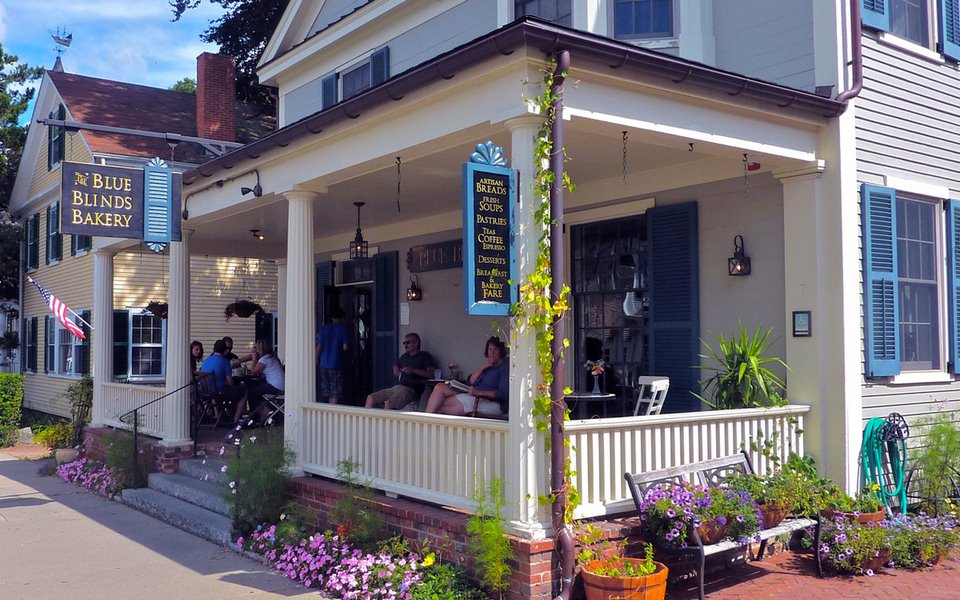 … for the last 40 years, our people (more about “our people at www.twelvetribes.com) have been working and raising our families together, building communities where the love that has been poured our into our hearts can bloom and care for others.

No big deal, right? (Do I know what the Twelve Tribes are? Nope. Does it matter? Who cares — just gimme some croissants.)

But it seems that a former employee — and former member of the Twelve Tribes faith — has hijacked the bakery’s Facebook page. After lying dormant for years, the page has become very active, with the employee posting some disturbing statements lately. One recent post was made in the guise of a Twelve Tribes “true believer” — which is to say it’s really, really racist.

And here’s what African-American member John Stringer says on the site:

… our race is becoming increasingly known for its self-destructive behavior.

Polarization and rage are not solutions. The only way to save our race is that we would submit to reason and responsibility, just as all the other minorities who are thriving and are not destroying or exploiting their own people. There has to be mutual submission on all sides for any society to survive.

A 2001 New York Post article was more blunt about the beliefs of the group founded by Elbert Eugene Spriggs:

According to founder Spriggs, “Submission to [white people] is the only provision by which [blacks] will be saved.”

He also advocates beating children with resin-dipped rods when they misbehave, because “the only way to erase the guilt in a child’s selfish heart is with the rod.”

Which brings us back to the bakery.

This is what the ex-employee posted on the five-year-old Facebook page a few days ago: 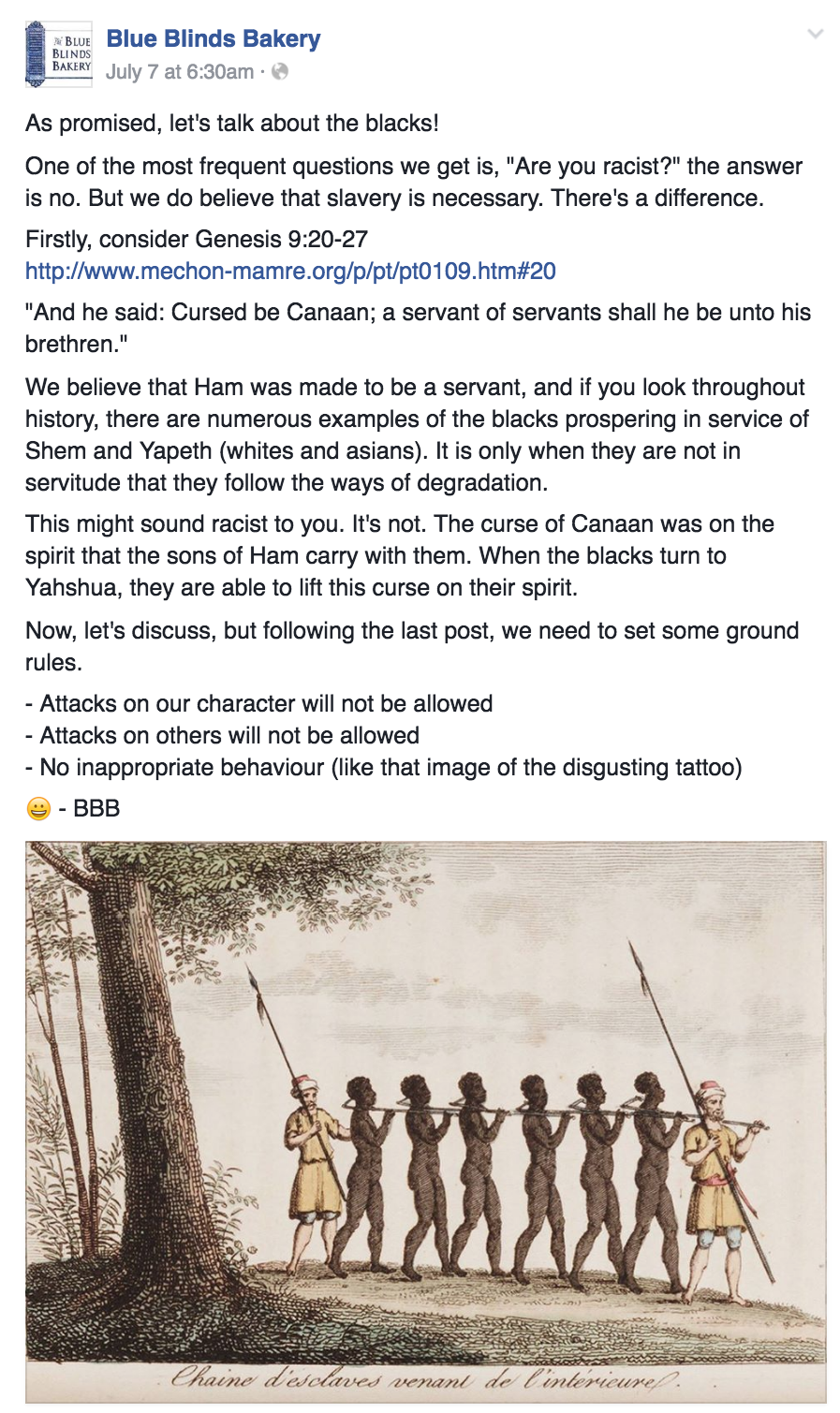 As promised, let’s talk about the blacks!

One of the most frequent questions we get is, “Are you racist?” the answer is no. But we do believe that slavery is necessary. There’s a difference.

“And he said: Cursed be Canaan; a servant of servants shall he be unto his brethren.”

We believe that Ham was made to be a servant, and if you look throughout history, there are numerous examples of the blacks prospering in service of Shem and Yapeth (whites and asians). It is only when they are not in servitude that they follow the ways of degradation.

This might sound racist to you. It’s not. The curse of Canaan was on the spirit that the sons of Ham carry with them. When the blacks turn to Yahshua, they are able to lift this curse on their spirit.

“Let’s talk about the blacks”: Perhaps the worst possible way to ever start a conversation.

People were rightfully wondering is if this was a troll or the actual beliefs of the bakery’s owners… and it seems like the answer may be both. The person posting isn’t a random spammer, but he’s also not a current “employee” of the bakery… He’s a former employee who’s using the bakery’s Facebook page as a way to showcase the faith’s nasty beliefs.

Yesterday, the same person posted this:

I was born into the Twelve Tribes, which owns the Bakery, and over the time I grew up there, the things I have posted on this Page were all taught to me as being fundamental truths. Without access to internet or books that carried an opposing view, I knew nothing else.

It was only after I left that I started realising how demented and twisted the views behind this religion are.

On top of that, there is an intense amount of psychological and physical abuse that goes on behind the walls of the Bakery that makes your favourite muffins. This religion preys on guilt and fear, taking disillusioned people and making them think that everything outside of the community gates is out to get them. Eventually you start believing them. Then this stance leads into negative encounters which makes you fear and believe it more. Hard to explain until you’ve been in it.

Thirdly, and most importantly, this “cult” brutally abuses children under the pretext of discipline. Not only are they remorseless, they are proud of it. The day they beat the courts in a case where the police confiscated their children — which was won by a judge ruling the raid unconstitutional, not on the actual abuse — is one of their proudest moments.

Why did I post this? No one believes us when we talk about our upbringing. No one can relate to coming from a place of total isolation on that level and having to learn what a human is. Most people who leave the cult go through a five year cycle of depression and self loathing after they have some resemblance of recovery. Yet every time you walk in and out of this building, you’re helping them mint more broken people like the treasury department mints valueless dollar bills. You’re walking into a place that is deeply racist, homophobic, and sexist.

I posted these beliefs from the Twelve Tribes point of view because I didn’t want to tell you what your opinion on their beliefs should be. I just want you to know what their beliefs are. Form your own opinions, be it good or bad.

Don’t believe me? Ask them about what I’ve posted. Specifically. It’ll surprise you.

Some of us ex-members are going to be talking to media in Boston as a group. I will post the result of that on this page.

In case you’re wondering, the bakery’s *actual* (and current) owners seem to be aware of what’s going on. They’ve set up an alternative Facebook page called “Blue Blinds Bakery — real” and claim the other page was probably set up by the employee when he worked there years ago, but they remained in the dark about it until now. Which sounds like a weird thing for small business owners to say about a Facebook page until you realize there really were no postings on the page for several years. It was created, then mostly abandoned until just recently. They’ve called the former employee’s statements “slander” without actually saying why, though they told Boston Magazine:

“To say that their allegations are severe twisted and utterly untrue would so lightly scratch the surface that its hard to consider it worthwhile to comment at all,” they said via Facebook message Monday morning.

No matter what happens with Facebook, though, the onus will ultimately be on Twelve Tribes members to defend their beliefs — or admit that the posts weren’t really that off the mark.

I’ve reached out to the former employee for further comment.

(Thanks to @lynjoele for the link)

July 11, 2016 Baker Rejects Customer's Birthday Cake Order After Learning She's Gay -- From Her Facebook Profile
Browse Our Archives
What Are Your Thoughts?leave a comment