There’s a Simple Solution for This…

A PostSecret reader says he’s worried about what his wife will think of him on their wedding night because he’s a Christian: 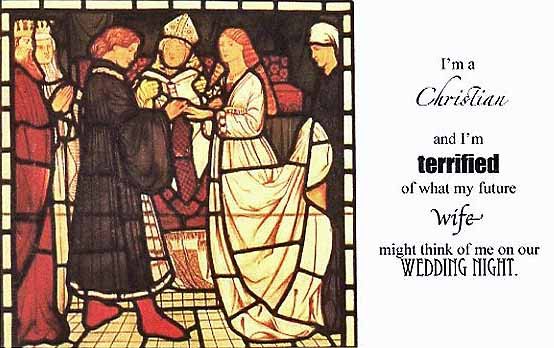 I’m assuming that means he’s a virgin who fears he won’t know what to do in the bed. And he’s probably right. Until he knows and understands what his partner wants in bed, it’s virtually impossible to be “good” without any practice.

The sad part is that there’s really nothing stopping him from getting that practice right now… except his own faith-based guilt and fear that he’ll be upsetting God.

It’s all in his head.

I’m not being judgmental here, and I’m not mocking him, either. I’m just being honest. Most people are going to be bad at sex at first, and there’s a very obvious way to get better. If that’s not a priority for you, fine, go ahead and admit it. But it makes little sense to worry about something that’s entirely within your control.

July 10, 2016
Here's a Cringe-Worthy Rap Song About Tithing
Next Post

July 10, 2016 North Carolina Police Chief: To Solve Our Problems, Let's Pray and Remember That All Lives Matter
Browse Our Archives
What Are Your Thoughts?leave a comment