Ateístas de Puerto Rico has just filed a federal lawsuit against the island’s Department of Education and several government individuals, claiming that several schools held Christian religious ceremonies this past March in which converting students was part of the goal. 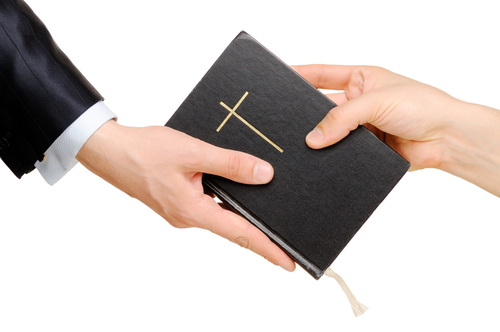 In diverse publications in social media, particularly those of Héctor Delgado Ministries, and Chaplain Wilfredo Cameron Santiago, it is clear that the activities are Christian-Evangelical proselytizing and indoctrination campaigns, promoted and funded by the Department of Education through its Regional Director and school directors, that the language and message are from Pentecostal origin, that there was repeated mentioning of “exorcising demons”, “converting students to Christ” and the term “Crusades” was used to refer to these events.

There are bible readings, prayers, and Christian-Evangelical music played in these Christian religious ceremonies through loudspeakers, sound from which the students cannot escape, making them a forced captive audience.

They’re not kidding about that last part. In one case, non-religious students were “required to assist [at] the basketball court where the religious service was being held.” When they didn’t want to participate, their teacher told them they had to.

Those claims alone are a major problem, but the atheists went a step further. They asked the schools if they could put together an event of their own for the students, following all the same rules as the Christians.

You can guess how that turned out.

They identified themselves as members of Ateístas de Puerto Rico and explained to school officials that they were seeking to conduct a similar activity under the same conditions in which the aforementioned Christian activities were conducted at a date during that semester or the next one. They handed the school employees to whom they were directed a written request which described the details and goals of the activity, which were, in essence, to teach students about atheism, secularism, humanism, superstition, religious history and religions in general. It also included a postal address, email and two telephone numbers for contacting them or the organization. They were told, in each school, that the school directors were not available at the moment, but that they would soon get back to them and hand the directors the written request.

After all attempts to schedule a similar conference by Ateístas de Puerto Rico were ignored and no attempt to contact the organization or its members was ever made, it became evident that the schools were willfully doing so.

If these claims are accurate, any decent judge should rule in the atheists’ favor. Hell, a judge in Mississippi could figure this one out. There’s no excuse for having these Christian assemblies in public schools. Students are supposed to be getting educated, not brainwashed.

What’s appalling is just how many people, principals and government officials, allowed this to happen.

July 10, 2016
Illinois Pastafarian Told to Get a New Driver's License Without a Colander on Her Head
Next Post