Illinois Pastafarian Told to Get a New Driver’s License Without a Colander on Her Head July 10, 2016 Hemant Mehta

When Rachel Hoover went to get her driver’s license renewed in the northwest suburbs of Chicago a couple of weeks ago, she insisted on wearing her strainer. After all, she’s an ordained minister of the Church of the Flying Spaghetti Monster. And it worked! They respected her wishes and took the picture she wanted: 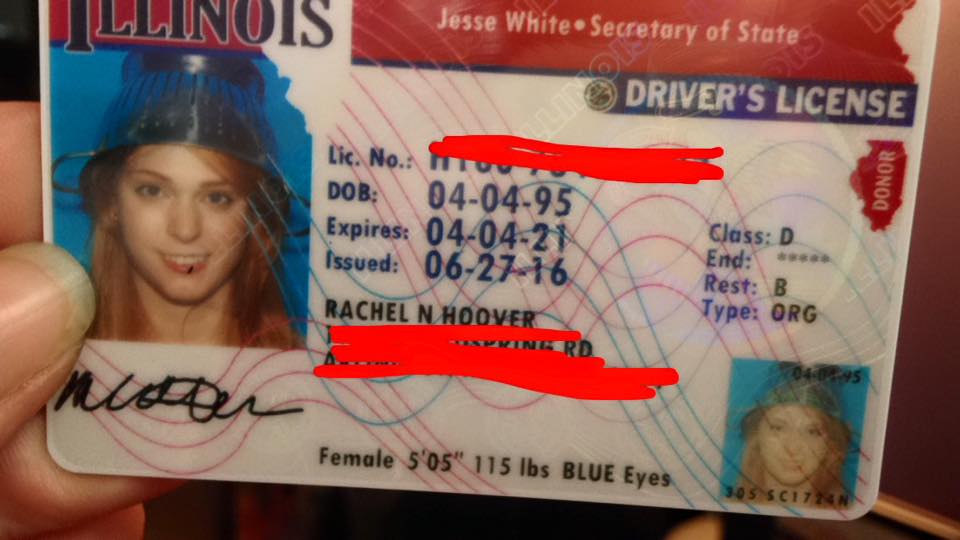 But days later, she received a letter in the mail from the Secretary of State, telling her the picture had been taken “with an incorrect photo” and she had a month to take a different one. 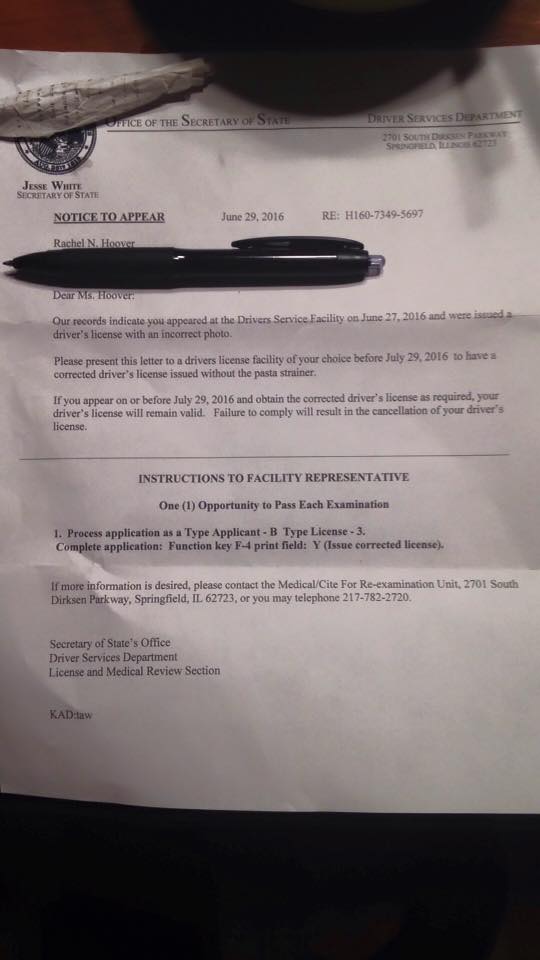 A spokesperson for the office brushed aside her beliefs:

Agency spokesman Dave Druker said Hoover shouldn’t have been allowed to wear the strainer on her head in the first place and “we are looking into why that was done.”

Druker said the state does allow citizens to wear religious headdress in license photos. Muslim women, for example, may wear hijabs as long as their faces are visible.

He said the office would not make an exception for Pastafarians. He noted that Hoover was not wearing the pasta strainer when she entered the facility, putting it on specifically for the photo.

Hoover said later it was impractical to wear a strainer all the time, though she asserted that some practitioners do.

But this is the whole point of the exercise, isn’t it? Who gets to decide what constitutes a firmly-held belief? You or the government? If Hoover says she’s a Pastafarian and upholds the sort of carb-loaded Humanism it espouses, why does the government get to dismiss it? Is the number of adherents the benchmark by which government officials get to say whether or not something is a religion?

Hoover says she’s not budging if she can help it:

“Some people say a Flying Spaghetti Monster sounds silly. But to me, because I didn’t grow up with that, the idea of Jesus sounded silly to me,” Hoover said.

She’s only 21 and doesn’t have the money to hire a lawyer, but she’ll continue taking a stand as long as she can. I’ve reached out to her for comment.

(Thanks to Kris for the link)

July 10, 2016
Pastor: America's Current Violence Problem is Due to Christians Not Proselytizing Enough
Next Post

July 10, 2016 Puerto Rican Atheists File Lawsuit Over Government-Approved Christian Events at Various Schools
Browse Our Archives
What Are Your Thoughts?leave a comment