If the anti-LGBT “religious freedom” bills popping up all over the country look identical to one another, it’s because they are.

Freedom For All Americans, a group dedicated to ending anti-LGBT discrimination, has put together a report showing the biggest players working to take away rights from LGBT people. Shocker: They’re mostly religious groups, and they’re all sharing funds, hateful language, and spokespeople. 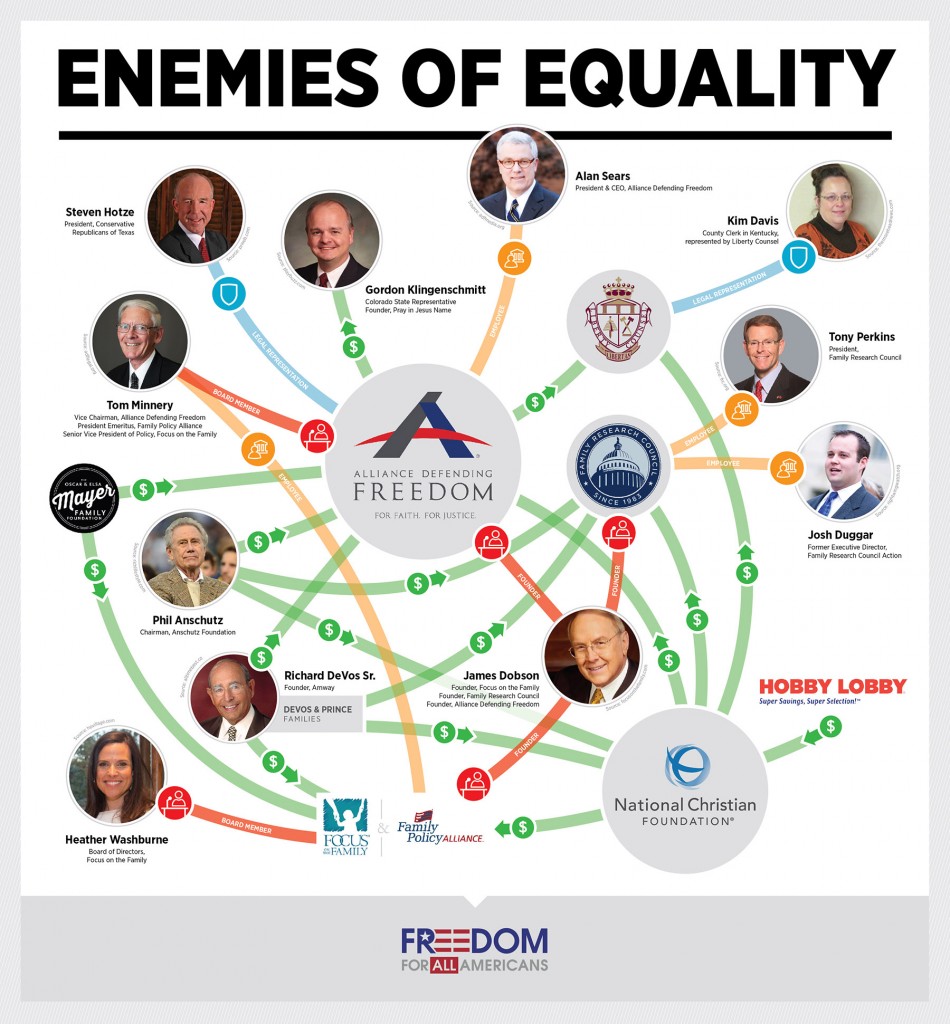 There’s also an interactive version here, where you can learn more about each person and organization and how they’re working to legalize religious-based discrimination.

“We started seeing bills that looked 80 to 90 percent identical in language start to pop up around the country,” McTighe said. “The language was so clearly being coordinated.” In a report to be released on Thursday called “Enemies of Equality,” FFAA shows that 17 bills in 14 states that target transgender Americans “used almost identical language and it’s based off of a model policy ADF started pushing four or five months ago.” All told, there are more than 200 anti-LGBT bills pending in 34 states.

A few names you may recognize: Kim Davis, the Kentucky clerk who claimed her religion wouldn’t allow her to marry same-sex couples; Gordon Klingenschmitt, the (soon-to-be-former) Colorado State Representative who preaches that LGBT people are possessed by demons; Josh Duggar, the “family values” advocate who reportedly molested some of his underage family members; and Tony Perkins, president of the Family Research Council and all-around terrible person.

The organizations bankrolling these efforts include the Alliance Defending Freedom, which had $48,310,833 worth of revenue in 2014; the National Christian Foundation, which reported $1.57 billion in assets in 2014 and receives funds from Hobby Lobby (ugh); and a few others. In all, FFAA estimates that anti-LGBT groups are spending more than $150 million on this “cause” every year.

“We’re not just kind of cataloguing this for retroactive historical purposes to look back at this legislative session,” McTighe of FFAA said of his group’s effort to expose the intricate web of anti-LGBT interests. “We expect that this will be even more pronounced in the coming legislative session and that the ADF and the groups that it has sway over will continue to get more engaged and will continue to file more and more anti-LGBT bills that are being coordinated… by… national organization[s] with a clear anti-LGBT agenda.”

On the one hand, it’s important to know where these attacks are coming from and what’s ahead. On the other… man, is it disappointing to see how much time and money is being spent to take away basic human rights.

July 8, 2016
For Raping a Pre-Teen Boy With a Crucifix, Irish Priest Will Get At Most Two Years In Jail
Next Post