A man traveling to Austin for Pride was booted from his Airbnb reservation when the host found out he’s gay.

Buddy Fisher booked a room in Austin for late August using the home-sharing site. When the system asked for the purpose of his trip, he said he was going for the city’s Pride festival. About an hour after he paid for the room, he received a message that his reservation had been canceled, along with this message from Wasif, the Airbnb host: 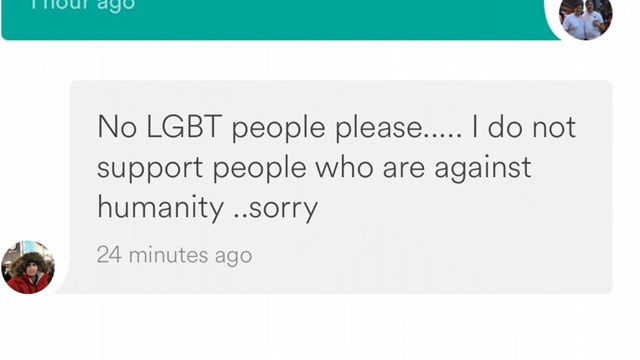 “No LGBT people please. I do not support people who are against humanity. Sorry.”

Airbnb apologized quickly, offered Fisher a list of other places to stay, and removed Wasif from their system. But obviously, that doesn’t make the situation any less humiliating and dehumanizing.

“It really really upset me, because I don’t feel like I don’t support humanity,” Fisher said. …

“It felt like we’ve been going in the right direction, but then something like this happens. It’s like you take five steps forward then two steps back.”

Incidents like this probably happen even more often than we’re aware of, and they’re not prohibited under federal law:

Anti-LGBT housing discrimination remains common, and there is no national law against it — something the Equality Act, pending in Congress, would rectify. And only 22 states ban housing discrimination based on sexual orientation (20 include gender identity as well); Texas is not one of them. In states that have these laws, LGBT people file housing discrimination complaints at about the same rate as women and racial minorities, according to a recent Williams Institute study.

Short-term rentals like Airbnb could also be considered public accommodations; only 21 states ban discrimination in this realm based on sexual orientation, with 19 including gender identity too.

But Austin is among the numerous cities that prohibit discrimination in both housing and public accommodations. So Fisher could seek justice by reporting the incident to city government.

What an awful start to a Pride vacation. Fisher says he’s still going to Pride in Austin; moments like this show why supporting LGBT people remains as relevant as ever.

July 8, 2016
Philadelphia Archbishop: Remarried Couples Should Be "Like Brother and Sister" and Abstain From Sex
Next Post