On Tuesday, Ken Ham held a ribbon-cutting ceremony for Ark Encounter, his Noah’s Ark theme park which officially opened this morning. (Friendly Atheist applied for a press pass to that ceremony. We were rejected. I have no idea why…)

But get this: At the moment when Williamstown (Kentucky) Mayor Rick Skinner cut the literal red tape with giant prop scissors, there were two public school marching bands playing behind him, promoting the Christian theme park: 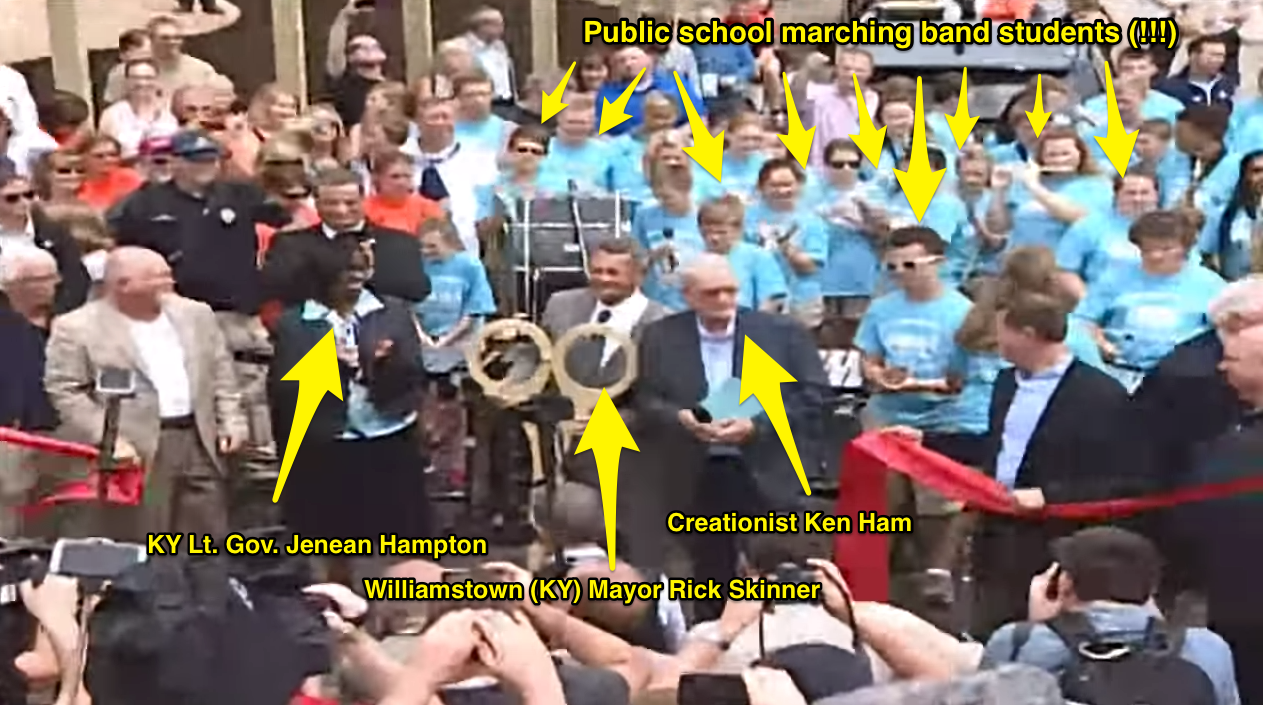 The Freedom From Religion Foundation just sent a letter to the two school districts that include Williamstown High School and Grant County High School, informing them of the legal problems involved in participation:

There are… serious constitutional issues with public schools helping a private religious ministry to launch a park meant to convert people and collect a fair bit of money in the process.

In short, it is unacceptable to expose a captive audience of impressionable students to the overtly religious atmosphere of Ham’s Christian theme parks.

Even if appearing at this event was voluntary for students, that doesn’t negate the problem since they’re still at the Ark representing their school districts:

FFRF is asking for assurances that there will be no further links between the schools and Ken Ham’s fantasy world:

In this country, Ham is free to erect monuments to his bible, but public schools are not permitted to expose the children in their charge to religious myths and proselytizing.

In summary, public schools cannot organize trips for students to either the Creation Museum or the Ark Park.

We look for your written assurances that no further WIS or GCS staff will organize, promote, sponsor, or otherwise facilitate trips to the ark park or Ham’s religious agenda. Students are free to travel to the park, but schools cannot play a role.

You can expect Ham to say none of this had anything to do with religion, a claim that only makes sense if you ignore the giant elephant(-carrying Ark) in the room.

July 7, 2016 Scenes from Ark Encounter's Opening Day (Outside the Ark)
Browse Our Archives
What Are Your Thoughts?leave a comment