A Decade Later, the Kids Featured in Jesus Camp Speak Out

Remember Jesus Camp? It’s the 2006 documentary that captured life inside a fundamentalist Christian summer camp (and got a lot of attention for a scene in which the kids prayed to a cardboard cutout of President George W. Bush). A lot of atheists saw it as evidence of indoctrination at work. 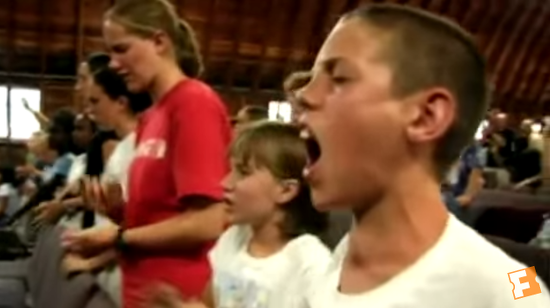 Josiah Hesse of The Guardian caught up with a couple of the children who were featured in the movie to find out what they’re up to now. After all, if they were pre-teens in the movie, they’re well past the age of reason now.

Andrew Sommerkamp was 10 in the film. He’s no longer an evangelical Christian, though he still clings to some form of spirituality:

“Was it child abuse? Yes and no,” he said in a recent interview, about his time at Kids on Fire church camp. “I think they had the best of intentions, but I see it as sick people trying to treat sick people. It’s their coping mechanism for figuring out why we’re alive. I wouldn’t trade that experience for anything, though, because it allowed me at such a young age to question my existence.”

He was also critical of the camp’s director:

By the end of our conversation, Sommerkamp said that he didn’t think he was abused. He was extremely critical of evangelicals, at one point calling Becky Fischer “a terrible fucking person who is fueled by the spiritual suffering of other people”. But, he said, he had chosen to have love for her, and was even grateful for the experience of Jesus Camp.

I should say another child from the film, mentioned in the article, has positive experiences from the camp and helps run a Christian ministry today.

The article is a fascinating look at kids who were, by many viewers, pigeonholed as brainwashed against their will. At least from this small sample size, it’s evident that kids who attended camps like this one can still make up their own minds in the future.