The “Science” in the Creation Museum July 6, 2016 Hemant Mehta

The “Science” in the Creation Museum

With the opening this Thursday of Ark Encounter, it’s worth taking a step back and looking at Answers in Genesis’ other monument to misinformation, the Creation Museum.

Authors and professors Susan L. Trollinger and William Vance Trollinger Jr. explore it, warts and all, in their new book Righting America at the Creation Museum (Johns Hopkins University Press, 2016). They write about the exhibits, videos, and placards in the building, while also giving context about this nation’s history of fundamentalist Christianity. 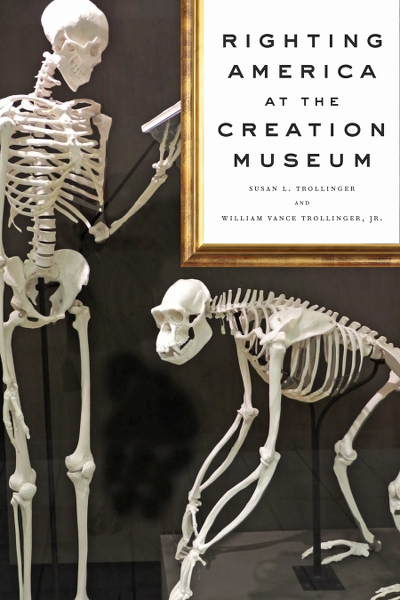 In the excerpt below, the authors explain the “science” you find in the museum:

In the Starting Points room, the Earth appears at least ten times in association with God’s Word (versus in association with Man’s Reason). Each time it appears in a two-dimensional representation of a sphere floating in space. In Six Days, which is the film shown in the Six Days Theater, the Earth appears five times as a three-dimensional sphere floating and rotating in space. In one image, one large land mass and one smaller land mass can be seen. Neither appears as a flat circle but, instead, as an irregular organic shape. In the Wonders of Creation room appear two-dimensional images of the Milky Way and its spiral arms, the Earth as a sphere floating in space, and the solar system with the Sun at the center and orbital rings suggesting the movement of the planets around it. Videos like “The Solar System” add many more images of the Earth, the other planets in the solar system, and the Sun at its center. Similarly, the animation of Adam’s creation shows the Earth floating in space with the Moon nearby and the Sun in the distance. The Voyage of the Ark room features a video displayed on a composite of four large flat screens that shows a three-dimensional spherical Earth floating in space as floodwaters quickly consume the surface of the Earth. In the flood geology section three placards feature seven images of the Earth in either two-dimensional or three-dimensional representations of a sphere floating in space. In addition, five maps of the continents in the Post-Flood room show them in their present-day shapes with oceans and seas separating them, rather than in a single flat circle. Finally, in the Created Cosmos video featured in the planetarium, the Earth is shown numerous times as a sphere floating in space. Its landmasses appear in their contemporary shapes with oceans and seas among them. The solar system appears at least three times. In each case the Sun is a sphere at the center with spherical planets orbiting it. Distant stars float in space rather than sit fixed on the surface of a dome. A distant solar system is depicted with planets orbiting it as well. The Milky Way, along with many other galaxies, is also shown as a three- dimensional form floating in space.

In all, the Earth appears more than twenty times on placards in the Creation Museum. Each time, it appears as a sphere floating in space. Many more representations of the Earth as a sphere floating in space appear in videos shown in the Wonders of Creation room, the flood geology section, and the planetarium. Other images on placards and in videos depict the solar system with the Sun at its center and the Milky Way floating in space. Images and maps of the continents show these landmasses not as one single flat circle surrounded by water but instead in their contemporary shapes amidst oceans and seas on the surface of a spherical Earth. Put simply, at the Creation Museum, a modern universe is clearly on display.

In the Starting Points room, one of the first placards visitors see is titled “Same Universe.” At the center of the placard is an image of the Milky Way. Superimposed over the left side of the image are four images that depict, in order, the “Big Bang” in the form of what appears to be matter expanding; the beginnings of the solar system with the sun and two planets; the Earth, Sun, and Moon; and the Earth with water, a landmass, and clouds. These four images and their labels that refer, respectively, to the “Evolution of galaxies,” the “Evolution of our solar system,” the “Evolution of earth and moon,” and the “Evolution of continents” appear under the heading “Human Reason.” Below the fourth image appears the phrase, “Billions of Years Ago.” Superimposed over the right side of the image of the Milky Way are four more images that depict, in order, a blue sphere; the Earth with water and clouds; the Earth with landmass, water, and clouds; and the Earth with a landmass, water, clouds, Sun, and Moon. Next to each of these images are labels such as “Day 1 Let there be light,” “Day 2 Let there be a firmament,” and so forth. Above this series of images appears the title “God’s Word” and below the fourth image is a label “Thousands of Years Ago.”

The point of the placard is a simple one repeated again and again in the museum — namely, that evolutionists and young Earth creationists start with the same evidence, in this case the “Same Universe,” but draw different conclusions about that evidence on the basis of their “Starting Points.” Indeed, they do. Both start with a modern universe complete with spherical Earth rotating on its axis and orbiting the Sun along with the other planets in a solar system that is located on the edge of the gigantic Milky Way, which is but one galaxy among many in an enormous universe.

But how can that be so? If the Creation Museum promises, as Ham declares that it does, a literal interpretation of the Bible, how is it that visitors do not see a three-tiered universe and a flat, stationary Earth? The answer, quite simply, is that when it comes to representing the universe at the Creation Museum, a modern universe is preferred over the ancient cosmology indicated by a literal reading of the Bible.

Why is this so? Why do AiG and the Creation Museum impose a modern universe on the Bible, which clearly reflects in its language and phrasing an ancient cosmology? While we cannot speculate on intentions in this regard, it does seem obvious that if the Creation Museum were to display an ancient cosmology, it would be jarring to visitors who assume a modern universe. Indeed, to display an ancient cosmology would cement the idea, lamented by many fundamentalists decades after the Scopes trial, that accepting the notion of a young Earth means embracing a view of the universe that mainstream science disproved hundreds of years ago.

Moreover, imposing a modern universe on the Bible has certain rhetorical advantages — namely, it enables the visitor to have the experience of modern-day science seeming to confirm the Bible. If the cosmology of the Bible appears to be the same as modern-day science, then confirmation by scientific evidence can appear to be underway. Indeed, it is likely the case that in order for the science at the Creation Museum to “confirm” the Bible at all, the Bible’s cosmology must be made to match a modern universe. The physical rules of an ancient cosmology are quite different from those of a modern universe. Given that all the many pre-suppositions and rules of modern science reflect the structure of a modern universe, how could modern science confirm an ancient cosmology with a completely different structure and set of relationships among its heavenly bodies? For modern science to confirm a young Earth, the Bible’s cosmology must be made modern.

Commentators have argued that the Creation Museum seeks to dethrone science as a discourse of truth in order to elevate the status of young Earth creationism and a literal interpretation of the Bible. This is certainly true. While that demotion of mainstream science is especially visible in the Starting Points room and the flood geology section, it undergirds much that is seen throughout the museum. That said, when it comes to cosmology something else is clearly underway at the Creation Museum. Rather than dethrone science, science appears to be privileged to the point of imposing a modern universe onto the text of the Bible, in the process, as John Walton has observed, “making the text say something that it never said.” Indeed, when it comes to how the universe is made to appear to visitors, it seems that modern science rather than a literal Bible rules at the Creation Museum.

Righting America at the Creation Museum is now available on Amazon and in bookstores.

The above excerpt is taken from Righting America at the Creation Museum by Susan L. Trollinger and William Vance Trollinger, Jr. Published by Johns Hopkins University Press © 2016. Reprinted by permission of the publisher.

July 6, 2016
20 Pro-Science Billboards Went Up in Sioux Falls, SD, and the Designs Will Give You a Heart Attack
Next Post

July 7, 2016 A Five-Year-Old Explains How Earthquakes Work Using Jenga Blocks
Browse Our Archives
What Are Your Thoughts?leave a comment