If the people of Massachusetts vote the wrong way come November, this jerk could be one of their state senators: 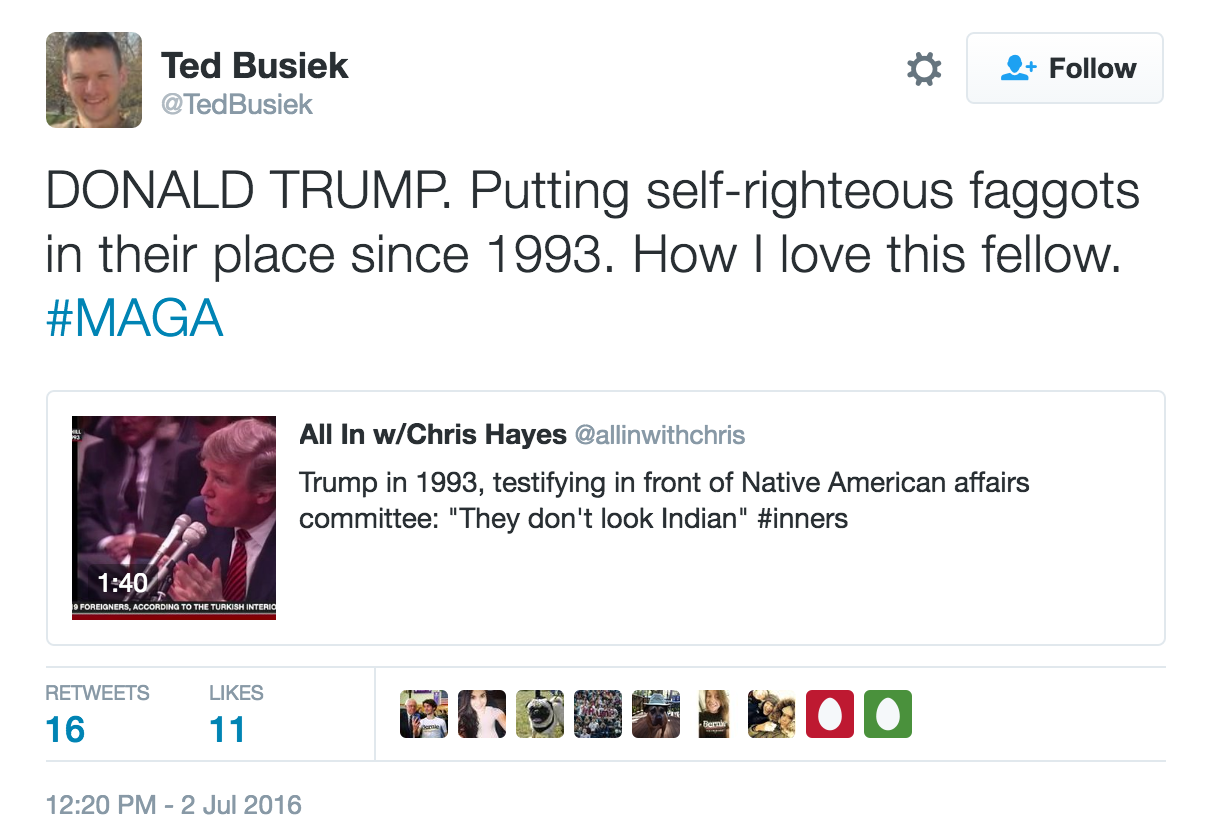 Ted Busiek, the Republican candidate in the Middlesex & Worcester District, claims he didn’t mean to say the F-word in a derogatory way. Rather, he meant it in the South Park way:

Busiek said he didn’t intend the term in a “hateful sense” or to imply that the congressman was gay, using the word instead to mean the congressman was “obnoxious” and was “kind of being a jerk.” Busiek, 30, who served four years in the Air Force, said so-called “social justice warriors” would “probably have a heart attack” listening to him and his friends talk, though he said it would be “very unlikely” that he would use such terminology publicly if elected to the state Senate.

“It’s hard for me to get exercised over naughty words,” Busiek said. He said, “You can insult somebody without being hateful.”

No one really cares how he and his friends talk in private. What matters is what he puts forth in public — and, much like his hero Donald Trump, he’s using this idea of being “politically incorrect” as cover for saying anything inflammatory that comes to mind.

If language and “naughty words” don’t matter, let’s see Busiek use the N-word. Or is that too far for him?

And make no mistake: This isn’t just language. Busiek really is anti-gay, as evidenced by his own website:

Particularly distressing is a modern trend in Massachusetts of same-sex couples being allowed to adopt and raise children. We ought to prohibit this.

I don’t even understand his explanation from a strategic standpoint. Let’s say he’s just trying to stick it to so-called “social justice warriors.” Why would he take pride in alienating people who might consider voting for him? Even Trump follows up his speeches about how he’s going to tear apart Hispanic families by deporting millions of undocumented people by saying “the Hispanics love me.”

Busiek, on the other hand, just thinks it’s funny to toss around a word that most people rightly understand is an anti-gay slur. Forget being politically incorrect — this guy has horrible judgment and a reckless attitude that says, “I don’t care whose feelings are hurt by what I say.” Why would voters put their trust in him? He’s not a role model. He’s a guy who gets off on being an asshole.

Even if you agree with his politics, he doesn’t deserve to be rewarded for being a dick.

On a side note, I heard Busiek’s Facebook page loves your comments. And you can fight back by donating to his opponent, Democrat State Sen. Jamie Eldridge.

July 6, 2016 PA Man Kills Himself After State Senators Gut Reform Bill Intended to Help Priest Abuse Victims
Browse Our Archives
What Are Your Thoughts?leave a comment