Televangelist Jim Bakker Forgave the People Who Put Him in Jail… Even Though He Was Guilty July 5, 2016 Hemant Mehta

We’ve featured televangelist Jim Bakker on this site many times over the years, but younger readers may not be familiar with the scandal that led to his downfall a couple of decades ago. In 1989, Bakker was sentenced to prison on charges of mail fraud, wire fraud, and conspiracy. He bilked his followers of millions of dollars, never delivered on his promises to them, and ended up in jail for five years (and that’s only because he was let out early).

He’s still a con artist in many ways, trying to sell giant buckets of food to Christians who believe the End Times are coming… despite no evidence of the End Times ever coming.

That’s why you won’t be surprised to learn Bakker has no remorse for what he did. He doesn’t accept blame for anything. In fact, he says, it’s the people who put him in jail who are the enemies.

And on a recent episode of his show, the truly magnanimous Bakker said they’re the ones who needed to be forgiven. 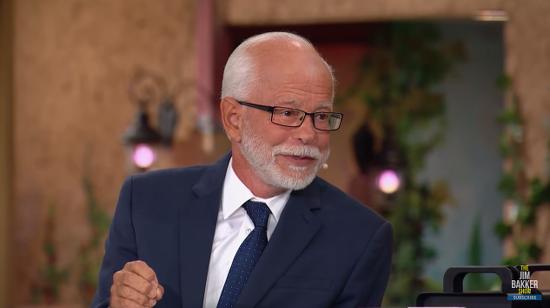 And the last thing I had to before I got out of prison, I had to forgive everybody! From my heart! Wow. That was the hard one. I prayed for ’em every single day. The judge, all the people who put me in prison, and there’d be days when I didn’t feel like praying for ’em, and I’d read their name to God… but He said, “What was that Scripture? What does it say? ‘Forgive from your heart’.”

Forgiving the people who put you in jail is an incredible thing to do when you’re innocent. When you’re exonerated from death row after several decades because the DNA evidence proves you didn’t do whatever you were convicted of, forgiving your captors is a remarkable act.

Bakker wasn’t innocent. And the people who fought for justice against him did nothing wrong. What Bakker did makes as much sense as stealing someone’s car, then telling the driver it’s okay because she didn’t know any better.

Forget forgiveness. Bakker ought to be apologizing to all the Christians whose money he stole on false pretenses. Instead, he’s acting like a victim, as if the world owes him for the crimes he committed.