While we were out last night stuffing our faces with food and watching fireworks, the folks at NASA celebrated the Juno space probe successfully entering the orbit of Jupiter after a five year journey. It’s the “farthest solar-powered spacecraft from Earth” and will give us an incredible amount of data about a planet we know relatively little about.

In a week when Ark Encounter will open its doors, enjoy this moment when real scientists knew they had accomplished something truly incredible, giving us a glimpse into the unknown: 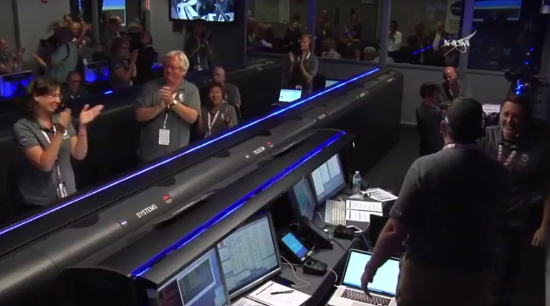 There’s no Creationist equivalent to that.

July 4, 2016
"Your Religion of Atheism is Irrational," Says Guy Who Wants to Debate Me
Next Post

July 5, 2016 As Americans Celebrated Freedom on July 4, an Illinois Man Was Arrested for Burning the Flag
"It's the repeated preying on innocent victims that fully demonstrates that being a member of ..."
RAM Anglican Priest Sentenced for Possessing Illicit ..."
"I cant prove God's existence but there is strong evidence that God exists. The BB ..."
Ed Christian Nationalist Preacher: God Will Soon ..."
"I am of the opinion that it is the least they could do. The very ..."
BensNewLogin Anglican Priest Sentenced for Possessing Illicit ..."
"Evidence Canaanites and hebrews are different races?"
Ed Christian Nationalist Preacher: God Will Soon ..."
Browse Our Archives
What Are Your Thoughts?leave a comment