The New York Times published a story over the weekend about the island nation of Kiribati, a place that may “become uninhabitable within decades because of an onslaught of environmental problems linked to climate change.”

It’s disturbing in a lot of ways. People have to consider whether to move abroad, if they have the requisite skills to be useful in another country, and how such a move would impact their culture.

But the biggest jaw-dropper is how many people don’t actually believe there’s any problem to worry about because their Christian religion doesn’t accept climate change. 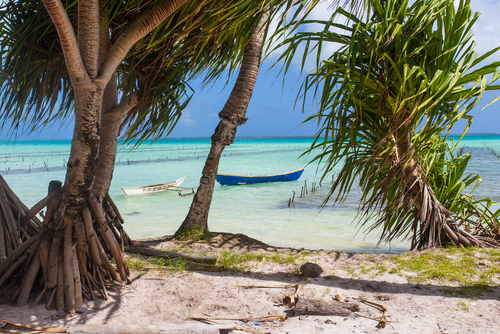 “According to their biblical belief, we’re not going to sink because God is the only person who decides the fate of any country,” said Rikamati Naare, the news editor at Radio Kiribati, the state-run broadcaster.

The tide that damaged the hospital here last winter was an exceptionally strong king tide, a surge that occurs twice a year when the moon is closest to the Earth. The waves also flooded the thatched-roofed outdoor meeting space of the local branch of the Kiribati Uniting Church.

While some people were alarmed, the pastor, Ms. [Tean] Rube, said she refused to accept the idea that Kiribati could disappear.

“We are Christians,” she said. “So we don’t believe that God could have given us this world and then take it away.”

The Christian denial of reality might just be frustrating in the U.S., but it poses a serious existential crisis in Kiribati. The longer they deny climate change, the less time they’ll have to adjust when the problem becomes too difficult to overcome.

July 5, 2016
Baptist Pastor: Religious Freedom is Crucial to Our Country (Unless It Applies to Muslims)
Next Post