For some reason, this is what the back of at least one vehicle in the Harper (Kansas) Police Department looked like until last week. 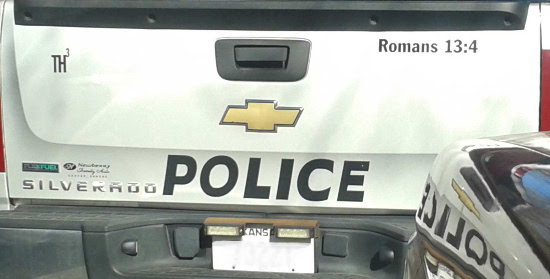 So… the cops are agents of the Christian God who seek revenge and “execute wrath” upon evildoers? Freaky.

The Freedom From Religion Foundation wrote a letter to the Department a couple of weeks ago urging them to take down the decal(s) as soon as possible, since this was an obvious violation of church/state separation.

The Supreme Court has repeatedly recognized that the First Amendment ‘mandates governmental neutrality between religion and religion, and between religion and nonreligion… Placing decals referencing biblical quotes on the back of a law enforcement vehicle fails to respect either constitutional mandate of neutrality.

It worked! Police Chief Douglas Murphy sent back a response that was just one line long:

The Harper Police Department has removed the decal “Romans 13:4” from the city-owned vehicle it was on.

That’s it. Problem solved without incident.

“This was a particularly obvious violation of the First Amendment for us to draw public attention to,” says FFRF Co-President Annie Laurie Gaylor. “Once that happened, the Harper Police Department quickly realized the folly of its ways.”

Given that this is Kansas, maybe someone needs to double check their other cop cars… but I’ll count that as a victory. The Bible verse shouldn’t have been there to begin with, but when the Chief realized people were watching them, he did the right thing. Maybe next time, he’ll just follow the law from the beginning.

July 4, 2016
America Will Surely Become a Christian Nation After This Speech
Next Post