Here’s an uplifting story for you. In opposition to North Carolina’s anti-transgender bathroom law, the Gay Men’s Chorus of Washington and Triangle Gay Men’s Chorus performed impromptu concerts throughout Raleigh a couple of weeks ago.

But they were met by Christian preachers who began quoting the Bible at them — specifically, verses calling for their deaths.

Instead of responding to their hate with more of the same, the singers kept doing what they do best… and just sang louder, drowning out the voices of religious bigotry. 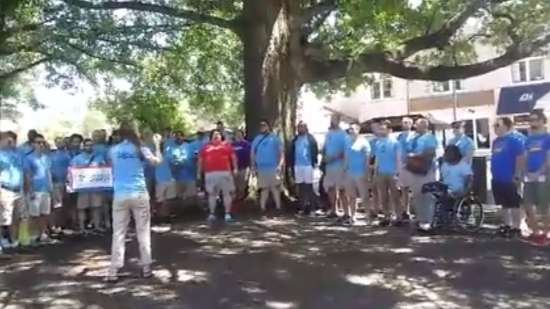 Elizabeth Breakey, who captured that video, wrote on Facebook:

I’ve never heard such blatantly violent hate speech. I was in tears. And yet, these brave men stood directly in front of them and performed with pride, courage and conviction a song that perfectly sums up the battle.

The song was “Make Them Hear You” from Ragtime. And they were heard loud and clear.

July 3, 2016 Egyptian Atheist Currently in Hiding Makes Video Urging Viewers to Rethink Their Belief in God
"Ex Naval Chaplain has a tantrum . Sadz ."
Jim Klingenschmitt: Biden is Letting the Antichrist ..."
"Where is the evidence that supports what you claim about the Wholly Babble's authenticity and ..."
se habla espol Why Are Christian Leaders Empathizing with ..."
"If YHWH didn't know ahead of time that Adam and Yves would seek morality through ..."
se habla espol Why Are Christian Leaders Empathizing with ..."
"People like that have no business in patient care anywhere."
San_Ban Texas Public Hospital Will Take Down ..."
Browse Our Archives
What Are Your Thoughts?leave a comment