Pastor Steven Anderson, who celebrated the Orlando gay nightclub massacre by saying “at least 50 of these pedophiles are not gonna be harming children anymore,” just posted a video showing off his new t-shirt.

It says “Straight Pride” on the front — take that, people who thought #HeterosexualPrideDay was a joke — but the more disturbing part is what’s on his sleeve: 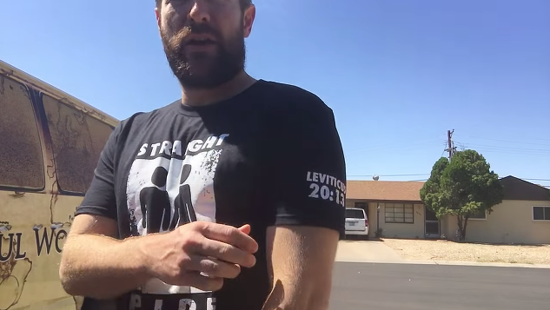 Leviticus 20:13, of course, is the verse that calls for gay people to be put to death:

If a man also lie with mankind, as he lieth with a woman, both of them have committed an abomination: they shall surely be put to death; their blood shall be upon them.

Usually, when we say Christians cherry-pick Bible verses, it’s because they only quote the good ones. We need a term for when they choose the absolute worst passages.

July 3, 2016
When Your Job Makes You Question Your Faith
Next Post

July 3, 2016 These Gay Men's Choruses Drowned Out Christian Preachers Calling for Their Deaths
Browse Our Archives
What Are Your Thoughts?leave a comment