Richard Gallagher, a board-certified psychiatrist and a professor of clinical psychiatry at New York Medical College, has a book coming out that literally gives the devil his due. It’s about demonic possession, which Gallagher says is totally a real thing. In a Washington Post article that takes mental illness back into the Dark Ages, he explains how he reached that conclusion. 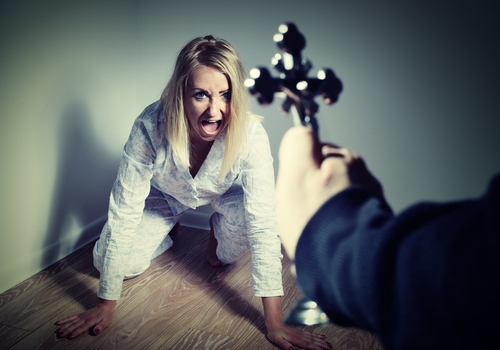 In short, despite having trained at Yale and Columbia, and being, in his own words, “a man of science” as well as “a man of reason,” Gallagher became convinced that a woman he was asked to render an opinion on in the late 1980s had a nasty case of demon infestation.

She called herself a witch and dressed the part, with flowing dark clothes and black eye shadow around to her temples.

And thus, the stage was set.

In our many discussions, she acknowledged worshipping Satan as his “queen.” … I was inclined to skepticism. But my subject’s behavior exceeded what I could explain with my training. She could tell some people their secret weaknesses, such as undue pride.

“Some people” only. Kind of disappointing for a possessed woman who can harness Satan’s otherworldly powers.

And “undue pride.” Ha. Approximately ninety percent of all the people I’ve ever met seem to suffer from it. It’s like asking someone to guess your last name, and being floored when the answer is “I’m pretty sure it has at least one or two vowels in it.” Witchcraft!

She knew how individuals she’d never known had died, including my mother and her fatal case of ovarian cancer.

A couple of weeks ago, I went to a performance by Gerry McCambridge (“the Mentalist“) in Las Vegas. He performed similar feats. For instance, he guessed what strangers’ professions were, and guessed what number was on the die that audience members rolled when he had his back turned. McCambridge wasn’t wrong a single time the entire evening. Now get this: he neither claims to be possessed by demons nor to be blessed with paranormal gifts.

I would encourage Richard Gallagher to visit any competent “magic” show, and witness what a sly, self-trained performer with high perceptive powers can routinely accomplish.

Six people later vouched to me that, during her exorcisms, they heard her speaking multiple languages, including Latin, completely unfamiliar to her outside of her trances. This was not psychosis; it was what I can only describe as paranormal ability. I concluded that she was possessed.

Did the people who heard her speaking Latin have a solid working knowledge of that language? Could they verify that she spoke real, intelligible Latin, rather than a random collection of Latin-sounding words? I ask because the field of xenoglossy consists almost exclusively of hoaxes, misunderstandings, and questionable claims.

It is the weakest, consistently maddening gambit that otherwise rational human beings play: I saw something I don’t understand, therefore it’s supernatural. As an ostensible “man of science,” shouldn’t Gallagher have drilled that fallacy into his skull in the very first year of his studies?

Regardless, his mind was made up, and in no time he went from being a doubter to being a believer.

For the past two-and-a-half decades and over several hundred consultations, I’ve helped clergy from multiple denominations and faiths to filter episodes of mental illness — which represent the overwhelming majority of cases — from, literally, the devil’s work. It’s an unlikely role for an academic physician, but I don’t see these two aspects of my career in conflict. The same habits that shape what I do as a professor and psychiatrist — open-mindedness, respect for evidence and compassion for suffering people — led me to aid in the work of discerning attacks by what I believe are evil spirits. …

Is it possible to be a sophisticated psychiatrist and believe that evil spirits are, however seldom, assailing humans? Most of my scientific colleagues and friends say no, because of their frequent contact with patients who are deluded about demons, their general skepticism of the supernatural, and their commitment to employ only standard, peer-reviewed treatments that do not potentially mislead (a definite risk) or harm vulnerable patients. But careful observation of the evidence presented to me in my career has led me to believe that certain extremely uncommon cases can be explained in no other way.

It goes on like that. Gallagher has not witnessed a single case of demonic levitation, he concedes, but it must be real because

… half a dozen people I work with vow that they’ve seen it in the course of their exorcisms.

Oooh, great. I’m sure they have video evidence of levitation and other paranormal feats, right? Alas: creepy creatures, Gallagher says,

… will hardly allow themselves to be easily recorded by video equipment, as skeptics sometimes demand.

It will not surprise you to hear that Gallagher, in that initial case of the witch who marked his entry into the field of professional demon extraction, had been approached by a Catholic priest. He continues to work with clergy as a “consulting doctor,” no doubt making a tidy sum on the side. (If fortune smiles on him, he’ll now make good money from book sales and TV performances, too.)

I don’t know if Gallagher is a sincere professional or a cunning hoaxster. If the former, it strikes me as necessary that he finally get some psychiatric help himself. If the latter, and if nothing were damaged but churches’ bank accounts, I must confess to something crazy myself: The man has my full support.

July 2, 2016
After Settlement, Gay Users Will Finally Be Able to Use ChristianMingle.com
Next Post

July 2, 2016 This Horrific Story Shows Why Even Private Christian Schools Need Government Oversight
Browse Our Archives
What Are Your Thoughts?leave a comment