Edie Windsor Omits “Under God” From Pledge of Allegiance at Stonewall

Windsor led a recitation of the Pledge of Allegiance, with one notable moment: She left out the words “under God.” A Fox affiliate uploaded a video clip of the event, and YouTube commenters are losing their minds: 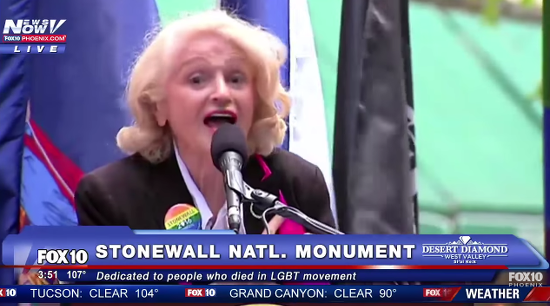 According to the Villager, this was less of a political statement than you may think:

She left out the words “under God,” which is the way she grew up saying it before Congress inserted the deity in 1954 at the behest of the Knights of Columbus. Windsor and her partner and later wife, Thea Spyer, returned to New York from a vacation the second night of the rebellion and soon became activists themselves.

Indeed, the phrase “under God” was not originally part of the Pledge of Allegiance. It wasn’t added until 1954, as a response to the country’s growing fear of Communism:

Responding to the threat of Soviet Communism (again more national fear), President Eisenhower encouraged Congress to add the words “under God” to the pledge.

This, he declared, would “reaffirm the transcendence of religious faith in America’s heritage and future” and “strengthen those spiritual weapons which forever will be our country’s most powerful resource in peace and war.”

Congress’s 1954 amendment would create the Pledge of Allegiance most Americans say today:

I pledge allegiance to the flag of the United States of America, and to the republic for which it stands, one nation under God, indivisible, with liberty and justice for all.

Just as reciting the Pledge isn’t a requirement to being an American, declaring yourself as part of a “nation under God” certainly isn’t, either. But try telling that to the trolls on YouTube calling Windsor a monster when all she’s doing is reciting the Pledge as she’s always known it.

July 1, 2016 A Jehovah's Witness Refuses to Talk to Her Dying Mother Because She Left the Faith Decades Ago
"I SEE! I was wondering why do bad things only ever happen to disengaged Christians ..."
Ondřej Čtrnáct Evangelist: Your Circumcised Tithes Will Protect ..."
"Only US christians. Maybe Canadian ones too. But it’s not a thing in France at ..."
Martin Penwald Evangelist: Your Circumcised Tithes Will Protect ..."
"Câlins, bébé. J'aimerais te câliner moi-même."
CorporalKlinger Marcus Lamb, Whose Christian TV Network ..."
"I bought last year 8 low cost new Chinese tires for my truck (2600 CAD), ..."
Martin Penwald Evangelist: Your Circumcised Tithes Will Protect ..."
Browse Our Archives
What Are Your Thoughts?leave a comment