When a woman at a John McCain rally in 2008 said that then-candidate Barack Obama was an “Arab,” he rightly shut her down by dismissing her statement and saying, “I just happen to have disagreements with [him] on fundamental issues and that’s what this campaign’s all about.”

When a woman at a Donald Trump rally yesterday said that Muslims should be banned from working for airport security, Trump took a very different approach. 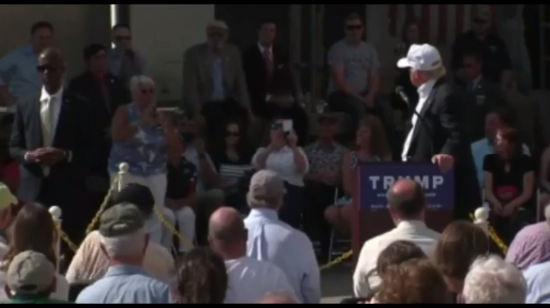 “Why aren’t we putting our retirees, our military retirees, on that border or in TSA?” the woman asked. “Get rid of all these hibijabis they wear at TSA. I’ve seen them myself,” she said, gesturing toward her face. (The woman seemed to be referring to the hijab, the headscarf worn by many Muslim women.)

1) We’re not putting retirees in those positions because they’re retired.

3) Trump had a perfect opportunity to shoot down this anti-Muslim bigotry… and whiffed. Though once you’ve already proposed banning Muslims from entering the country, it’s not a stretch to say you’ll consider banning law-abiding Muslim citizens from certain jobs.

Tell me again why evangelicals are so desperate to endear themselves to this bigot?

July 1, 2016 Atheists Counter Iowa Governor’s Bible Reading Proclamation By Reading Anti-Religious Books Aloud
"There can be ONLY ONE cheese! https://uploads.disquscdn.c..."
Hayseed Christian Mom: “Blue’s Clues” is “Indoctrinating” ..."
"SOOOOO we can't include URLs in our comments? It's been a while since I've tried."
DoctorDJ Supreme Court Allows More California Churches ..."
"He says atheism is a cult. $100 says he believes in QAnon."
Missael Silvestre Christian Pastor: Trump Will Be a Two-Term ..."
"https://uploads.disquscdn.c..."
DoctorDJ Supreme Court Allows More California Churches ..."
Browse Our Archives
What Are Your Thoughts?leave a comment