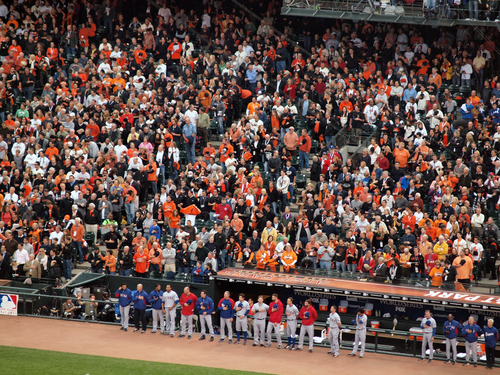 “God Bless America” is as divisive as American politics: Kaskowitz’s research found that 83.8% of people who described themselves as “very liberal” dislike the song, while only 20.5% of people who called themselves “very conservative” have a problem with it.

And more than 88% of atheists dislike the song, Kaskowitz found.

Much like the Pledge of Allegiance, it’s hyper-patriotic, as if God loves our country at the expense of all the other ones. It’s also a slap in the face to all the American minorities who know damn well we’re not “a land that’s free.”

Also: These are baseball games. Why sing a Christian song when there are perfectly good alternatives involving peanuts and Cracker Jack (says this Cubs fan)?

Also: There’s a Canadian team in the league! How much of a dick do you have to be to play that song when they’re on the field?

So this July 4, join me at the Church of Baseball by not rising and not doffing your cap for a song that is not the national anthem of a nation that is not uniquely blessed by some deity that doesn’t exist anyway.

Keep in mind that the MLB can do whatever it wants. It’s not the government. They can play “Jesus Loves Me” during the 7th inning stretch if they want to. But if the goal is to make all the fans feel welcome and included, singing “God Bless America” is an awful way to do it.

(Image via Eric Broder Van Dyke / Shutterstock.com. Thanks to Brian for the link)