About a month ago, Iowa Governor Terry Branstad signed a proclamation urging citizens to “read through the Bible on a daily basis each year until the Lord comes.” He was referring to a “99 County Bible Reading Marathon” taking place over this long weekend in front of all the county courthouses in the state.

There’s still the possibility of litigation over what Branstad did, but in the meantime, two Iowan atheists are showing up at several courthouses in Northeast Iowa, making sure the crowds also get to hear an alternative biblical perspective.

Justin Scott, Founder and Director of the Eastern Iowa Atheists, and activist Ruth Walker are going around reading excerpts from The Awkward Children’s Bible, God is Not Great, and God: The Most Unpleasant Character in All Fiction. 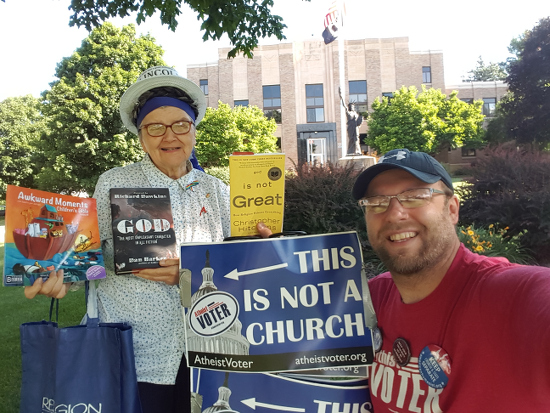 “It’s an ambitious idea but at least its one of acceptance and equality for atheists as we hope to take a public stance for those that believe that Iowans deserve to have a Governor that doesn’t favor one group of Iowans over another,” said [Justin Scott]. “We aim to show Iowans, in towns large and small, that the governor’s proclamation was offensive to those of us that believe in elected officials not endorsing a specific religion the way Gov. Branstad has done.”

“Our experience so far is that the Governor’s proclamation to read the bible has fizzled,” said longtime atheist activist Ruth Walker of Cedar Falls, Iowa. “At the first stop the lady stayed less than an hour and nobody, so far, has shown up in Bremer County.”

Thanks to the Governor, then, the people in those parts of Iowa will get to hear the more unsavory parts of the Bible without opposition from Christians who prefer to cherry-pick their verses.