As recently as January of 2013, the U.S. Air Force made clear that “when
a flag folding ceremony is desired and conducted by Air Force personnel at any location, on or off an installation, this script is the only one that may be used.” They were referring to a secular script drenched in patriotism.

The alternative, which the Air Force said can be used at “personal ceremonies as long as the participants are volunteers,” is explicitly Christian.

So what happens when there’s a retirement ceremony with Air Force officials involved? That’s the question at the heart of a recent controversy.

When retired Senior Master Sgt. Oscar Rodriguez gave the flag-folding speech at his friend’s retirement ceremony at Travis Air Force Base in April, he decided to use the Christian version of the speech. But because he was supposed to use the secular version, he was disobeying protocol and essentially kicked out of the ceremony by force. 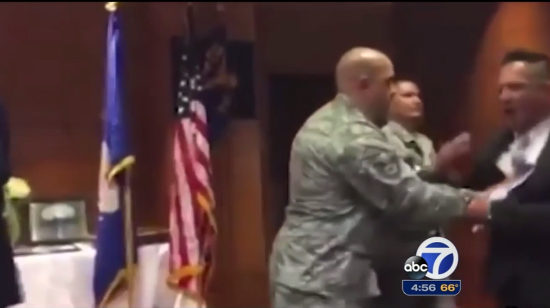 It certainly doesn’t make for good optics, but the question still needs to be answered: If Air Force personnel are involved in a flag-folding ceremony on an Air Force base, even at a retirement party, is that an official event with secular rules or a private event where Christianity can be promoted?

Right now, the Air Force seems to be going back on its own policy:

In an email Monday to Air Force Times, Air Force spokeswoman Capt. Brooke Brzozowske said the [Air Force Instruction] should have been, and will be, updated to clarify that religious-based scripts can be read during flag foldings at retirement ceremonies.

The Military Religious Freedom Foundation, led by Mikey Weinstein, isn’t having it.

The astonishing and embarrassing disparity between the Air Force’s official statement from late yesterday and the actual controlling Air Force regulation could not be more blatantly apparent!

MRFF demands that the Air Force immediately retracts its prior fatally erroneous statement from late yesterday and replace it with a statement that confirms the total applicability of AFI 34-1201, Section 2.15 to all USAF flag folding ceremonies.

Weinstein says MRFF will file a lawsuit (on behalf of 14 clients, all of whom are Protestants or Roman Catholics) if the Air Force doesn’t retract Brzozowske’s comment.

The Air Force says it’s conducting its own investigation into the matter.

I don’t see how they can allow a formal Christian ceremony when Air Force personnel are involved in an event on a military base. That would literally be government endorsement of religion.

First Liberty Institute, the conservative legal group that is appalled by the idea of government neutrality on religion, is defending Rodriguez in the matter.

July 1, 2016
A Jehovah's Witness Refuses to Talk to Her Dying Mother Because She Left the Faith Decades Ago
Next Post

July 1, 2016 Columnist is Right to Tell Major League Baseball to Retire "God Bless America" at Games
"Herbal syrup? Reminds me of how a South African health minister once prescribed beetroot to ..."
Akira625 COVID-Spreading Preacher: Joe Biden is Promoting ..."
"I feel you. Ted Cruz is one of my Senators ..."
Feminerd Hatemongering MP Derek Sloan Booted From ..."
"When God eventually shows up and does whatever he does then he will get my ..."
ImanIdram Christian Who Spread “Prophecies” About Trump’s ..."
"Given how this supposed god has been working lately, an image of Drumpf and the ..."
pparf Christian Who Spread “Prophecies” About Trump’s ..."
Browse Our Archives
What Are Your Thoughts?leave a comment