A couple of days ago, Pope Francis said, in his usual roundabout way, that gay people deserved an apology from the Catholic Church (despite believing Catholic doctrine that homosexual “tendencies” are “objectively disordered”).

So when CNN’s Chris Cuomo asked the Catholic League’s Bill Donohue if he agreed with the Pope, you knew the Man With No Empathy wasn’t going to get on board.

Forget apologizing to gay people. Donohue wants them to apologize to him. 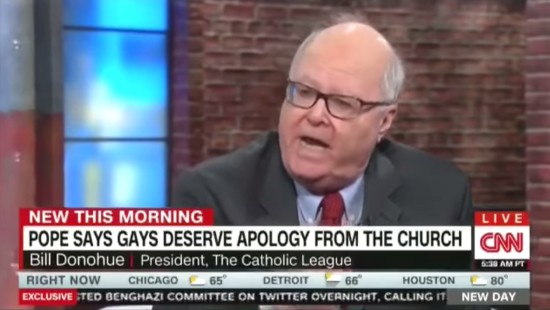 “Do you feel like apologizing to the LGBT community?” said Cuomo.

“No,” said Donohue. “As a matter of fact, I want an apology from gays! I’ve been assaulted by gays. I’ve never assaulted a gay person in my entire life!”

Donohue wants praise for never physically harming LGBT people… as if he’s doing something special. Meanwhile, he has spent years railing against LGBT rights. So while LGBT people have never done anything to make Donohue’s life worse, he’s built his career out of making life worse for them.

But if he wants an apology, he can have an apology.

Bill: I’m sorry you’re a pathetic, sad, bigoted, homophobic little man whose contribution to the world has been making it more unloving and less charitable.

And I thank you for making the Catholic Church an even more toxic institution, making people want nothing whatsoever to do with it.