Televangelist Jim Bakker had radio host Rick Wiles as a guest on his show on Friday, and Wiles did everything he could to freak the audience out regarding the Muslims in their midst: 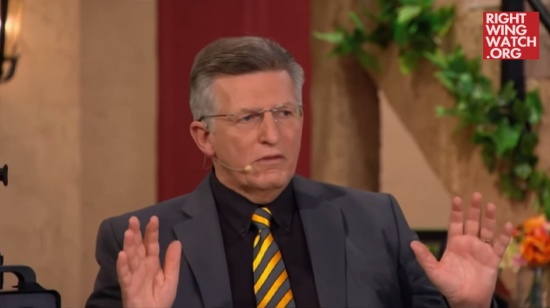 So I don’t talk about moderate Muslims and radical Muslims, no. There’s just Muslims, and Islam has a history of blood. Everywhere it’s ever gone, bloodshed. They conquer with the sword. Name one country you would like to move to that’s dominated by Muslims. Every one of them is hell on earth. That’s what they want to bring here. They wanna conquer by the sword, they want to kill nonbelievers.

There’s no such thing as a moderate Muslim? That’s going to come as a surprised to the millions of devout Muslims who are assimilated in western countries and hate the radicals as much as everyone else. If there are no moderate Muslims, then you’d see far more acts of violence than you currently do. And moderate Muslims have no desire, either, to live in countries under Sharia law. Saying they’re “demon-possessed” is perhaps the least problematic thing Wiles said.

Not that the host cared. Wiles urged the audience to buy Bakker’s Giant Buckets of Food — you know, before Muslims ruin everything.

“If there is an event this summer like a chemical gas attack where a vast amount of people are killed in the tens of thousands, the smart people will stampede to buy this food,” Wiles claimed. “The wealthy, the smart people, the people that know, ‘This is serious, I’ve gotta get all the supplies I can get.’ These four companies that produce this food will be sold out within days. The second thing you have to consider is that Homeland Security and FEMA either purchase all of it or seize it.”

As if the government could ever be that organized.

June 29, 2016
Gay Woman Works to Take Down Her Father's Anti-Transgender Campaign
Next Post