Mormon Leader: I Can Prove Joseph Smith Used “Seer Stones” Because I Have an iPhone June 27, 2016 Hemant Mehta

Mormon Leader: I Can Prove Joseph Smith Used “Seer Stones” Because I Have an iPhone

As the story goes, Joseph Smith translated the Book of Mormon through special “seer stones” which he dropped into a hat (to block out the light) and then read from.

And if that makes no sense to you… well, join the club. There are a lot of people who don’t buy that story, including the South Park guys, who had a field day with it.

Dieter F. Uchtdorf, a Mormon leader whose official title is “Second Counselor in the First Presidency,” just posted a response to the critics. Don’t believe in the idea of seer stones? You will after you read this!… or so he thinks. 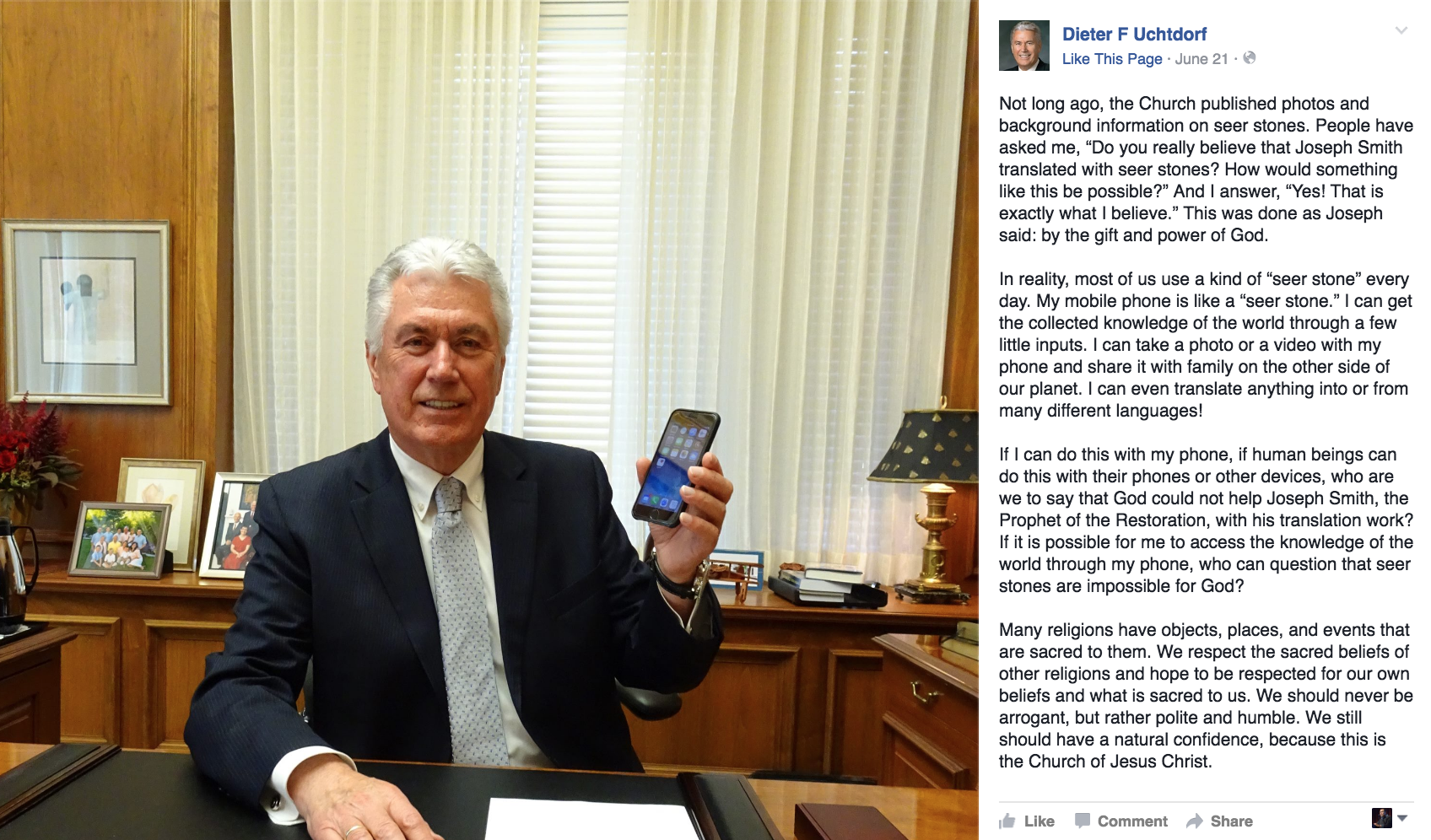 Not long ago, the Church published photos and background information on seer stones. People have asked me, “Do you really believe that Joseph Smith translated with seer stones? How would something like this be possible?” And I answer, “Yes! That is exactly what I believe.” This was done as Joseph said: by the gift and power of God.

In reality, most of us use a kind of “seer stone” every day. My mobile phone is like a “seer stone.” I can get the collected knowledge of the world through a few little inputs. I can take a photo or a video with my phone and share it with family on the other side of our planet. I can even translate anything into or from many different languages!

If I can do this with my phone, if human beings can do this with their phones or other devices, who are we to say that God could not help Joseph Smith, the Prophet of the Restoration, with his translation work? If it is possible for me to access the knowledge of the world through my phone, who can question that seer stones are impossible for God?

Many religions have objects, places, and events that are sacred to them. We respect the sacred beliefs of other religions and hope to be respected for our own beliefs and what is sacred to us. We should never be arrogant, but rather polite and humble. We still should have a natural confidence, because this is the Church of Jesus Christ.

Decades of modern computing technology led to the creation of an iPhone… therefore Joseph Smith read a bunch of words off of a couple of rocks. #MormonLogic

It makes as much sense as Creationist Ken Ham building a giant Ark (that can’t even float) using $92 million… and then claiming Noah could totally have done the same thing thousands of years ago without any of the same resources.

It makes me wonder: If Heavenly Father had the power to make the seer stones function like a smartphone, couldn’t he have just written out the damn translation for Joseph? Why make him jump through hoops so outrageous that they’ll eventually undermine the credibility of the entire religion?

June 27, 2016
The Catholic Vegan Dilemma: Can I Eat Communion Wafers?
Next Post

June 27, 2016 Supreme Court Overturns Texas Anti-Abortion Law
Browse Our Archives
What Are Your Thoughts?leave a comment