In a lovely bit of self-inflicted damage, Mike Huckabee owes the band Survivor $25,000 for playing their song “Eye of the Tiger” without permission at a Kim Davis rally last year.

The band made clear at the time they wanted nothing to do with that shitshow:

They successfully sued Huckabee, and both sides agreed to the $25,000 settlement. Huckabee was supposed to pay half the amount last month… but he hasn’t done that yet. Like Kim Davis, I guess he thinks he’s above the law. 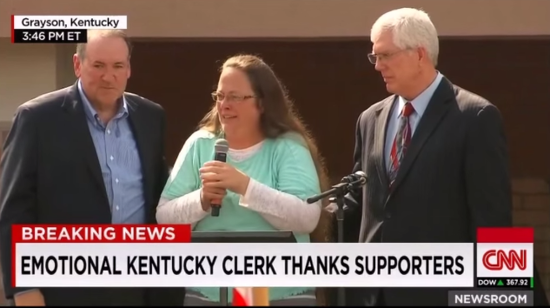 At the time, Huckabee had not paid for rights to use the song. The campaign was then sued for copyright infringement.

An out-of-court settlement was reached and Huckabee was required to pay $25,000 for the error. Half was paid in May and the other half, listed as campaign “debts and obligations,” is yet to be fulfilled.

Huckabee petitioned the Federal Elections Commission to start a legal defense fund to pay the remaining amount, but the organization issued a statement saying he’d need to alleviate the debt on his own.

Everyone send Huckabee’s pocketbook your thoughts and prayers in this difficult time.