This is a guest post by John, a pseudonym. He is a professionally licensed engineer who served in the U.S. Navy.

Considering the Noah’s Ark theme park slated to open in two weeks cost an estimated $92 million, you’d think Ken Ham‘s team would have done a better job of making sure the boat — the centerpiece of Ark Encounter — was designed properly. 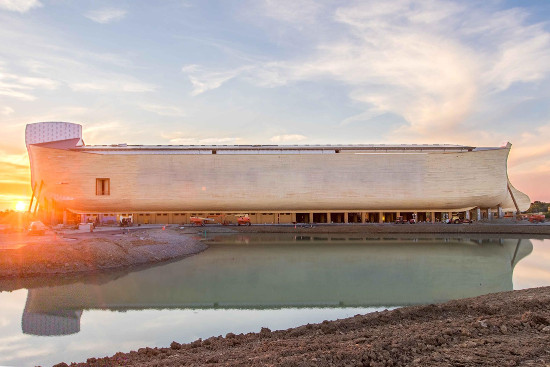 Even as a replica ship with modern requirements, many aspects of the design make no sense at all.

What makes me qualified to speak about this? Well, I’m a professionally licensed (PE) engineer who used to do facilities design and worked as an electrician. I also served in the U.S. Navy on two different ships as a Boatswain’s Mate Petty Officer. The point is: I know a little about shipboard life and what being at sea entails. I also have experience with design and construction methods. And what I’m seeing at Ark Encounter is ridiculous.

Before I point out the problems, let me make an important distinction. On AiG’s website and throughout the construction, the Ark is always treated as a ship. That implies that it was designed to go somewhere with a purpose. Cruise ship. Cargo ship. War ship. But Noah’s Ark wasn’t a ship. Noah had one job — to make sure the Ark floated and keep everyone on it alive. His Ark didn’t have propulsion, engines, or sails. It just had to float.

That means what Noah built was a barge. It was made to simply hold something while an external source pushed it around. (Think: Fuel barge, Coal barge, Crane barge, or Berthing barge.) Some barges are self-propelled, but for the most part, at least in my experience, they are not.

I bring that all up because the design of Ham’s Ark is ridiculous from a barge standpoint.

1) Ham’s Ark has a bulbous bow

Having a bulbous bow on a barge makes no sense at all. The reason that you see these on large ships is that they counteract the bow wake and reduce drag on the hull. This improves the fuel efficiency, speed, and range of the ship. Since the Ark was never meant to actually move through the water, this feature is utterly useless. It’s like adding a fin to the top of your car. It’s an addition that accomplishes nothing.

2) Ham’s Ark has a curved hull

Because the Ark isn’t intended to actually go anywhere, hydrodynamics should not be a concern. That means it takes a lot more work to cut the wood into a curved shape. The bell-bottom hull — the body of the ship — also makes it that much more unstable in the water. Any sailor could tell you that.

In fact, in an article about the Ark on the Answers in Genesis website, Tim Lovett once dismissed a box-shape design:

The box-like Ark is not entirely disqualified as a safe option, but sharp edges are more vulnerable to damage during launch and landing.

But what “launch” is he talking about? In the Genesis story, the Ark was built and then floated as the water rose. It was never “launched” as we would see of ships today. Sure, the wind may push it around, and the Ark may bump into a mountain or something, but if that’s going to happen, it’s unlikely that it’s going to survive any damage no matter the cause. There’s a reason ships with curved hulls tend to stay well-away from shallow waters and rocks.

Without propulsion, the hull being curved or box-shaped makes little difference. And considering Noah was supposedly building the Ark in a time-crunch, the aesthetically pleasing curves would have been the last thing on his mind. At Ark Encounter, it’s an added expense that makes no sense.

Also, as far as a “landing,” who cares? If Noah successfully guided the Ark to the point where he could “land,” the method of doing it would have been irrelevant since the Flood was over and everyone survived. Unless Noah was planning to resell the Ark to the highest bidder, who cares about any damage at that point?

3) Ham’s Ark has a big flap on the stern

The argument for having it would be that the flap helped steer the Ark into the wind, keeping it steady. But that’s very likely unnecessary. If there’s that much wind to begin with, the ship doesn’t have much of a chance. Lovett, in his piece about the Ark, implied that this was a common feature on ships “after” Noah’s journey, suggesting that we could have seen it during Noah’s time, but he provides no citations to back that claim up.

Frankly, I don’t know of any ship that has a flap in the stern as shown in the Ark’s design.

With so much money invested in this theme park, shouldn’t the Ark’s design have been at the top of the priority list? Obviously, a modern Ark couldn’t be built exactly as Noah would have done it — no state regulatory agency would have allowed that — but these design flaws have nothing to do with state specifications. They were consciously put there by the designers with no regard for how boats actually work.

Wouldn’t be the first time that happened.

June 27, 2016 Mike Huckabee Owes Band $25,000 After Playing "Eye of the Tiger" at Kim Davis Rally
Browse Our Archives
What Are Your Thoughts?leave a comment