As far as religious billboards and advertisements go, the signs put up by Pastor Lawson Perdue of Colorado Springs’ Charis Christian Center are pretty standard: 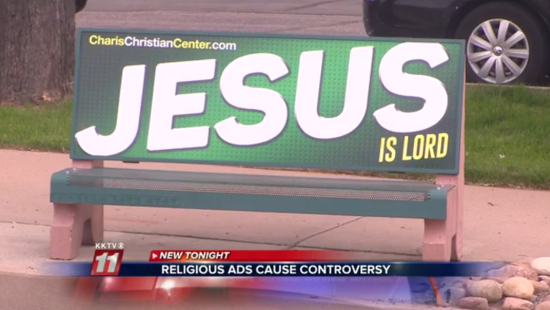 Those signs, which have been up for three years, would barely get a raised eyebrow from most people who see them. It’s a straightforward promotion of the basic Christian message: “Jesus is Lord.”

But the company that sold Perdue the advertising space has told him that, after his current contract expires on July 10, he will not be able to renew it. And the reason is absurd:

[Perdue] said he was told if the name Jesus was allowed, hate messages would have to be allowed, too.

That makes no sense at all. Advertisers have every right to reject hate speech. Even Christian bakers could say no to hateful messages without any legal repercussions. But if this company is allowed to say no to Perdue’s “Jesus” signs, what’s stopping them from rejecting an innocuous atheist sign? Nothing.

Making matters even murkier, Mountain Metro Transit told Perdue he could still put up ads with the name of his church. But the word “Jesus” was still a dealbreaker.

So he can promote Christianity… he just can’t mention the central figure of Christianity.

There is another option: They could just do a blanket ban on all religious or non-religious advocacy advertisements (including political ads). That’s what happened in New York when Pamela Geller‘s hate group American Freedom Defense Initiative wanted to run ads reading, “Killing Jews is Worship that draws us close to Allah.” After a judge said Geller was in the right to have her advertisement go up based on current policies, the Metropolitan Transportation Authority moved to ban all political ads.

A spokesman for the transit authority said the ban would take effect immediately. Under the revised policy the system will only display “paid commercial advertising, certain public service announcements that will help build goodwill for the MTA among its riders and the [public, and governmental messages].

Washington, D.C. did something similar after Geller wanted to put up ads featuring images of Muhammad.

So again: A blanket ban on advocacy ads, religious and political, would probably pass legal muster. But saying you can promote Christianity as long as you don’t mention Jesus seems like someone is cherry-picking what is and isn’t allowed.

Perdue says he’s already in touch with the conservative legal group Alliance Defending Freedom. For once, a lot of atheists may end up supporting their fight.

As the policy stands right now, he has every right to put up his signs, Jesus and all.

(Screenshot via KKTV. Thanks to Chris for the link)

June 27, 2016 Ken Ham's Version of Noah's Ark Is Horribly Designed
Browse Our Archives
What Are Your Thoughts?leave a comment