It’s Been a Year Since the Supreme Court’s Marriage Equality Decision and We’re Still Not Equal June 26, 2016 Camille Beredjick

I worked at an LGBT organization. People were still trickling into the office that morning, so some of the lights were off, and it was quiet. I’d been watching Twitter anxiously every SCOTUS decision day for weeks, and when the news finally broke that we won, I uttered a yelp of excitement and then started sobbing.

Our staff congregated in a conference room a few minutes later to take in the importance of the moment, and we reflected on how crucial it was not to get complacent in the fight for equal rights. I left work a few hours early to go hang out at the Stonewall Inn, where everyone was gathered in the street, dancing to Patti LaBelle and waving pride flags. On the same block, activists were gathering a contingent of people to go to a demonstration honoring the Transgender Day of Action. 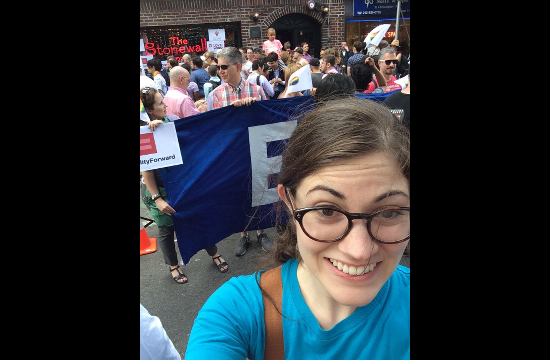 Marriage equality took decades of work to happen. It took millions of people, millions of dollars, hours of canvassing, countless coming-out conversations with tough parents, years of watching public opinion ebb and flow, months of recovering after political hits, more hashtags than any of us can remember, and lots and lots of patience. But if it was going to happen, it was never going to happen in a vacuum. And the pushback we’ve seen from right-wing conservatives on LGBT issues was inevitable, but that doesn’t make it acceptable.

By now, we all know why marriage matters, and why it’s about so much more than throwing a party with your 200 closest friends. From the desire to be affirmed as your child’s legal parent to the dignity of having your relationship recognized after your partner’s death, there are plenty of tangible reasons why marriage can mean so much to us — and that’s in addition to wanting to celebrate your love, which is perfectly legitimate, too.

When the marriage victory seemed imminent, our joyful hopes were tinged with fear. We worried that this would be the end of the line for LGBT forward-motion. We wondered if well-meaning straight allies — and maybe even some gay people themselves — would perceive marriage equality as the ultimate victory, a sign that we were finally equal and the war was won. We thought donations to non-marriage-related LGBT organizations would drop off and the chapter of our nation’s history focusing on LGBT progress would be closed.

We’re lucky, sort of, that that didn’t happen. Visibility has never been higher, the money hasn’t dried up, and the movement is anything but stagnant. At the same time, homophobia and transphobia are still rampant, perhaps even more so now than before. Conservative politicians who have given up on marriage are turning their efforts toward discriminating against LGBT customers and bashing transgender people. We’re reeling from the worst mass shooting in our nation’s history, and it happened at a gay bar. We are not equal.

It’s not unheard of for bigoted sentiments to spike after a major turning point like marriage equality, and much of it is happening in the name of “religious freedom.” After all, there have always been people who refuse to accept the separation of church and state, and there may always be people who fight tooth and nail to make sure LGBT people are treated as second-class citizens.

That’s another reminder of why we have to be mindful in our celebrations of marriage equality and other steps toward progress. This is a big deal, yes, but it doesn’t abolish the millions of hateful people who would still do anything to see us fall. It just renders them gradually less relevant.

I got engaged last month, and my fiancée and I are approaching the tornado of wedding planning knowing that our union will be legally recognized nationwide. That wasn’t the case when we started dating years ago, and I feel so humbled to be a part of the historic transition. But that doesn’t mean everyone’s happy about it, or that they won’t push the limits of the law to say so.

Anti-gay discrimination is illegal in New York, where we live, but a similar law didn’t stop bakers in Oregon from refusing to serve same-sex couples. When we were finding an apartment and talking to landlords, we used gender-neutral language for as long as possible before outing ourselves as a same-sex couple. We pick and choose where and when to hold hands when we’re out in public, as hate crimes against LGBT people have been on the rise all over the city in the last few years. And don’t even get me started on my anxiety over visiting our friends in less accepting parts of the country.

We have it so much easier than generations of LGBT people before us, but even we’re not off the hook yet.

That’s how I feel about marriage equality, one year later. We’re in a better place than we were, but we’re far from equal. Transgender people are being berated, harassed, and killed; disproportionate numbers of LGBT youth are homeless; there’s no federal law protecting LGBT people from discrimination; there’s still an increased risk of suicide within our community; and then there are unfathomable moments like Orlando. We’re not done.

It’s fine to celebrate the anniversary of marriage equality; hell, it’s important that we do. But we must always do so with the intention of looking forward as well as looking back. Marriage equality has been legal for 12 months now, but many of the problems I just mentioned are still looming over our heads; we must tackle them directly and unapologetically. If we, even for a second, assume that marriage equality means we’re done here, we’re accepting all those other fates as our norm. That’s not what the earliest LGBT activists would have wanted. That’s not what we want now.

I’m grateful to have been a part of the moment when marriage equality happened. I’m excited to be married in a world that’s more accepting than the one I was born into. I’m thankful for the groundwork laid by millions of LGBT people who helped get us here. And I hope we’ll keep up the momentum for the fights that remain.