This has to be one of the strangest examples of religious freedom overtaking common sense that I’ve ever heard.

It involves the Groffdale Conference Mennonite Church, a group that forbids driving in vehicles with rubber tires because that would be seen as a form of convenient transportation, or of conforming to the world in a materialistic way. The Bible, in Romans 12:2, says you shouldn’t do that.

So they don’t conform… but they still have to do manual labor and move their products from farm to farm. How do you do that without modern transportation (and those rubber tires)? Simple. They retrofit their tractors with steel tires, which are just uncomfortable enough that they’re not going to use them unless they have to — as an added bonus, it protects the horse/buggy combo that the Mennonites love so much. 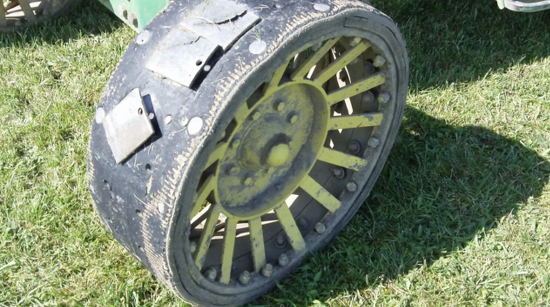 You might chalk this up to religious quirkiness, until you realize that when they use the public roads to go from one farm to the next, the steel tires cause a lot of damage. It cracks the pavement. It removes paint from the roads. And since Mitchell County (Iowa) spent $9 million to resurface the roads in 2009, officials were understandably upset that this group was essentially undoing all that work.

That’s why they passed an ordinance that year “to protect Mitchell County hard surfaced roads” which banned steel tires on the road. The state already had a law on the books about this, but Mitchell County upped the fine from $10 for a violation (according to the state) to $500, or a month in jail, or both.

The Mennonites were furious. They saw this punishment as less about protecting the roads and more about persecuting them for their religious beliefs. One of the Mennonites eventually sued, saying that the ordinance was a violation of his religious freedom. The case made it all the way up to the Iowa Supreme Court, which eventually sided with the Mennonites saying that the ordinance violated the First Amendment of the U.S. Constitution.

That ruling came down in 2012, and Mitchell County officials are still trying to grapple with the road damage issue. That year, in response the Supreme Court ruling, they modified the ordinance to address the unconstitutional issues, broadening it so it didn’t appear to single out any one particular group. But last year, when another member of the religion was issued a fine for driving with steel tires, the case went back to court… and a magistrate ruled last week that the revised ordinance was still too restrictive. (The County has appealed the ruling.)

So the case will go on. The roads will still be ruined. The steel tires aren’t going anywhere. And irrational religious beliefs will continue to be used as a weapon against common sense.

(Screenshot via YouTube. Thanks to Peter for the link)

June 25, 2016 The Story of Human Progress... in 10 Minutes
Browse Our Archives
What Are Your Thoughts?leave a comment