We often make fun of Christian churches for their embarrassing church signs because any random teenager could have pointed out the obvious problems in advance.

Yesterday, the Facebook page for ultra-orthodox Jewish website Aish.com posted this really disturbing image… see if you can figure out why so many readers were upset with it. 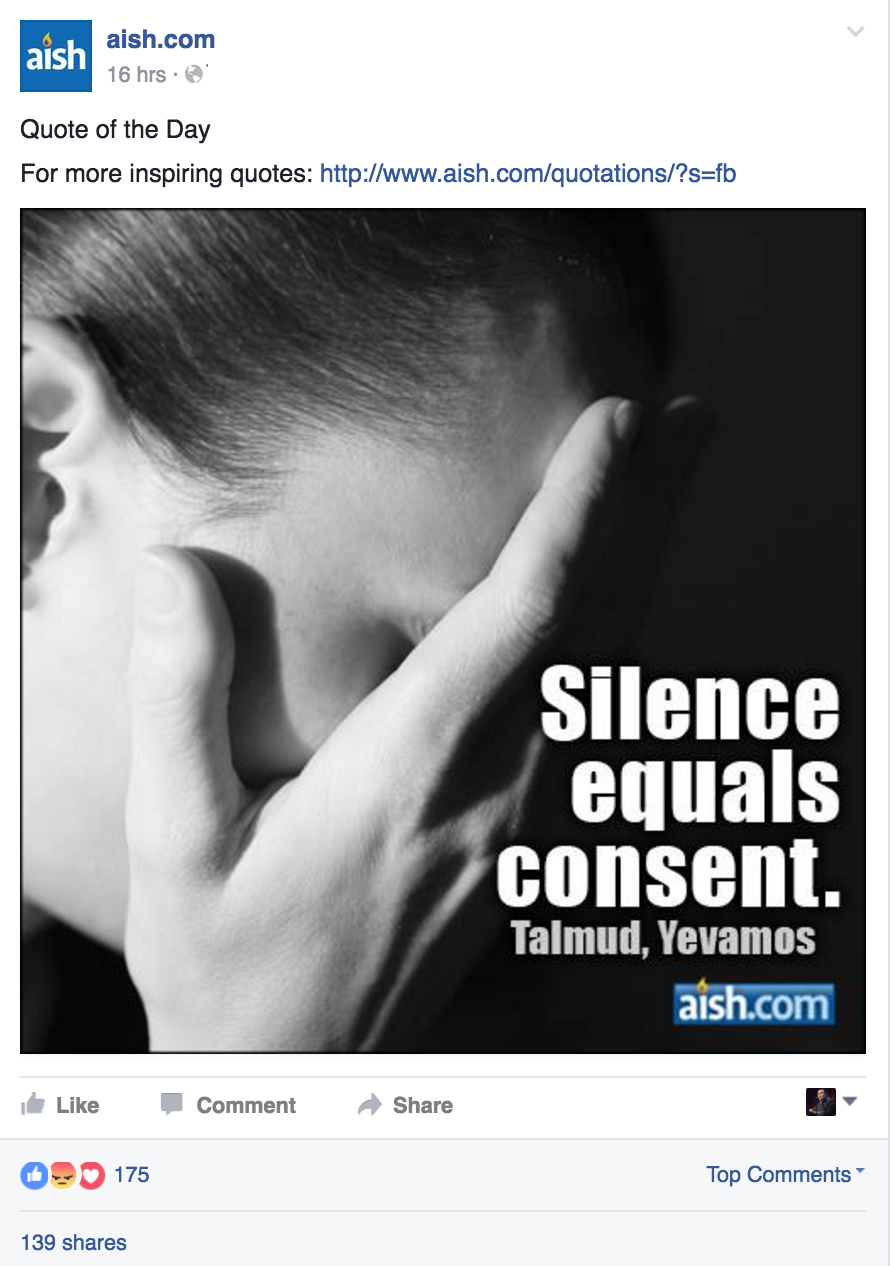 “Silence equals consent”… with the image of a young, crying woman holding her face in her hands. That phrase, of course, is an excuse used by a lot of rapists: She didn’t say no, which means she wanted it.

It took me a while before I could even figure out what they were actually going for: The phrase, in Talmudic context, says we shouldn’t be silent if we see a problem. If you don’t like Donald Trump, for example, you should say so; otherwise, it’s no different from you agreeing with him. Ditto with witnessing a crime.

In that context, it’s good advice.

Out of context, and with that picture, it’s all sorts of messed up. And when you put it on Facebook so that people can share it, it’s the out-of-context, disturbing interpretation that most people will see.

Rebecca M. Ross, a critic of orthodox Jewish outreach, offered an explanation of how this sort of thing happened that made a lot of sense to me:

This PR disaster is more than just a little mistake on social media. It’s indicative of a clear lack of understanding of the world outside of Aish’s religious bubble. In a time when images on social media spread like wildfire, Aish has shown that they are not at all in step with the world outside of their community — even though it is the people of that world who they are trying to recruit.

It’s just bad judgment all around.

That post has 139 shares as of this writing. If Aish doesn’t do something soon, far more people will see that image and (wrongly) assume this orthodox Jewish group is promoting rape. Commenters on the post are furious, asking for the site’s moderators to delete the post or at least provide more context.

But that may not happen anytime soon. In a delicious bit of irony, Ross points out that the post was made just before the onset of Shabbat, when orthodox Jews are prohibited from using electrical devices. Like computers.

How’s that for inadvertently shooting yourself in the foot?

June 25, 2016
The Australian Sex Party Has the Greatest Campaign Video Ever
Next Post

June 25, 2016 After Losing Battle Against Noah's Ark Theme Park, Kentucky Officials Pay $190,000 Legal Bill
Browse Our Archives
What Are Your Thoughts?leave a comment