President Barack Obama has officially added the historic Stonewall Inn to the list of national monuments. 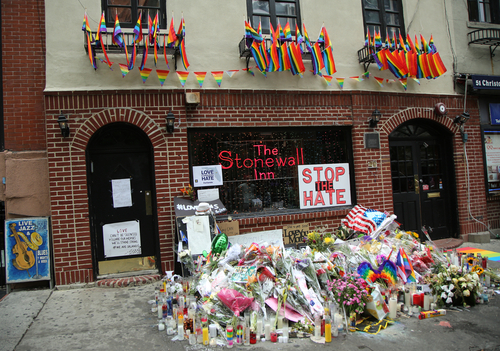 The Stonewall Inn, of course, is the New York City gay bar where the Stonewall Riots took place in 1969. After police raided the bar in the middle of the night, patrons fought back, leading to a days-long riot that is credited with igniting the modern LGBT rights movement.

The monument covers nearly 8 acres in New York’s Greenwich Village including a landmark gay bar, the Stonewall Inn. In June of 1969, gay patrons at the bar fought back against police persecution — an event that’s widely seen as a watershed in the campaign for LGBT rights.

“Raids like these were nothing new, but this time the patrons had had enough,” Obama said in a White House video announcing the new monument. “So they stood up and spoke out. The riots became protests. The protests became a movement. The movement ultimately became an integral part of America.”

Naming the bar as a national monument affirms that LGBT history is crucial to the history of the United States, especially when it comes to civil rights and social justice:

Although national monument designations are partly symbolic, backers of the move said it could bolster the fight against discrimination based on sexual orientation and gender identity, which led to the landmark 2015 Supreme Court ruling legalizing same-sex marriage.

The designation of Stonewall reflects the ongoing cultural shift the national park system has experienced during Obama’s presidency, as the president has used his executive authority to recognize sites that resonate with the country’s diverse makeup. Some of his previous designations have singled out places that correspond to seminal moments for African Americans, women, Latinos, Native Americans and Asian Americans, or are located near communities of color.

Local officials and national LGBT activists have pushed for years to designate Stonewall a national monument. They celebrated the announcement that had been expected since last month.

“The Stonewall National Monument will pay tribute to the brave individuals who stood up to oppression and helped ignite a fire in a movement to end unfair and unjust discrimination against LGBTQ people,” Human Rights Campaign President Chad Griffin said in a statement. “The announcement is especially significant following the horrific massacre in Orlando, a heartbreaking reminder of the hate and violence we continue to face as a community.”

We’re a few days away from the anniversary of marriage equality and of Stonewall itself, and we’re still processing Orlando and thinking about the role of gay bars in collective LGBT culture. This is a much-needed, well-deserved honor that couldn’t have come at a more significant time.