Dozens of people were injured last night at a Tony Robbins motivation seminar in Dallas — and five of them were hospitalized — after burning themselves during the fire-walking portion of the event. It’s a remarkable display of what happens when gullible people don’t understand how science works. 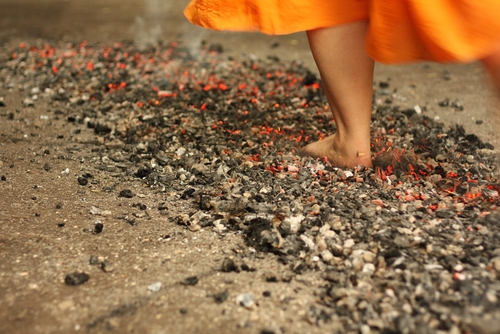 For those who are unfamiliar with him, Robbins’ schtick is that he makes you feel confident and powerful — like you can accomplish whatever you put your mind to. Nothing wrong with that. But as a demonstration of their newfound ability to overcome fear, seminar participants walk over a bed of hot coals. If you can do that, the idea goes, you can do anything.

But fire-walking is just an illusion. You’re not actually walking over fire. You’re walking over the remnants of a fire — hot coals that are now covered with ash to insulate you from the dangerous heat. If the pits look red (which happens at night, when these events take place), it’s only because you’re looking at the dying remains of a fire, not one that’s still raging on. To make the activity even safer, you’re supposed to dip your feet in water first (to provide more insulation). You should walk quickly over the coals without stopping — because, just like with sand on a beach, running over the coals might actually sink your feet deeper into the pit, closer to where everything is much hotter, and staying still is like touching a warm stove and keeping your hand right there.

In other words, you shouldn’t stop to take selfies, as some participants reportedly did:

“From my observation, there was someone in front of us and someone behind us on their cell phone, taking selfies and taking pictures,” said Jacqueline Luxemberg, who completed the fire walk. “[She asked others] to video record for her, so I think that that has a lot to do with it.”

A countless number of people have done the fire-walking challenge successfully at Robbins’ events — completely oblivious as to why the feat isn’t nearly as impressive as he makes it out to be. It’s a lot like lying on a bed of nails. Once you understand the physics of it, it’s no longer a magic trick.

But if you believe a three-day seminar worth at least $650 a ticket will help you achieve all the success that has so far eluded you, I guess believing you can walk through fire is a natural next step.

This isn’t the first time people have been hurt during the fire-walking segment of a Robbins seminar. In 2012, 21 attendees were injured. Clearly, people haven’t learned their lesson.

June 24, 2016
LGBT People Face More Hate Crimes Than Any Other Minority
Next Post

June 24, 2016 Obama Designates Stonewall Inn the First National Monument Commemorating the LGBT Movement
Browse Our Archives
What Are Your Thoughts?leave a comment