At Evangelical Schools, Why Are Atheists Typically Favored Over LGBT Students?

When you don’t believe in God, can you remain a student in good standing at an evangelical college — even though devout LGBT pupils are routinely frowned upon?

According to David Wheeler, writing for the Week, the answer is yes. 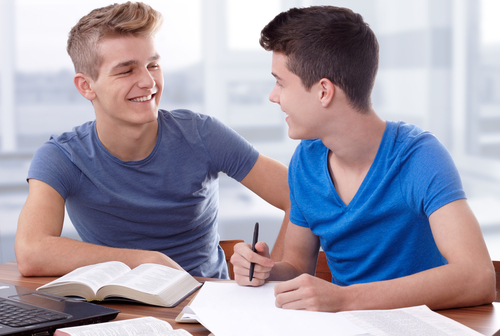 You might expect that announcing your lack of faith would carry the worst possible social stigma at Asbury University, a conservative Christian college in Kentucky where chapel attendance is required and most classes begin with prayer. But for Taylor Darden, coming out as gay was worse. “I was much more secretive about my sexuality than my agnosticism,” said Darden, who graduated from Asbury in 2010. …

[M]any highly ranked Christian colleges across the country … welcome atheists but forbid gay relationships. The result? An odd policy for a religious institution: Students who discard religion are embraced, but students in same-sex relationships — including legally married gay Christians — get rejected. …

[At] Missouri’s College of the Ozarks, … a student could openly discuss his lack of belief in God, but could not show affection to his boyfriend. And to ensure there’s no confusion on the issue of same-sex relationships, the student handbook explicitly forbids “touching, caressing, and other physical conduct of a sexual nature with a person of the same sex.”

Wheeler, the author of the piece, used to teach at Asbury. But the school’s treatment of LGBT students didn’t agree with him, and he decamped to the University of Tampa last year. He observes that

… atheist students get so much respect at Christian colleges, they can be elected to student government’s highest office. Case in point: A CCCU school [CCCU is the Council for Christian Colleges and Universities] made headlines in 2013 when the student body president, Eric Fromm, revealed his atheism in a column for the school newspaper at Northwest Christian University in Oregon. The reaction from the student body was “overwhelmingly positive.”

I confess to getting a little kick out of Eric Fromm’s last name, which is German for devout. Ha. Hemant wrote about him in a post that also addresses the question why an atheist would go to an evangelical college. (The short answer: NCU happens to have a “solid communications program,” says Fromm. To each his own.)

Back to Wheeler’s piece:

LGBT students — including gay Christians — often do not get the same reception at conservative Christian colleges. Baylor University, the nation’s largest Baptist university, dropped its ban on “homosexual acts” in 2015. But fear of LGBT students still lingers at the Waco, Texas, school. When I interviewed LGBT atheists at Baylor, most said they were more open about their atheism than their sexuality.

Wheeler quotes David Olsen, Chair of the Department of Communication Studies at California State University, Los Angeles, who says evangelicals feel much more threatened by gay Christians than they do by atheists.

“Conservative evangelicals have hung their entire position not really on the Bible, but on fears of the Other. If you are gay, you will be alone, diseased, drug-ridden, unhappy. And when one of their own — an LBGTQ believer — is not these things, their entire system crumbles.”

The situation will get better through demographics, Wheeler supposes:

Acceptance of LGBT Christians by evangelical colleges may start to improve as younger believers exert more influence on the debate. As a Pew Research Center report from last year noted, “Roughly half (51 percent) of evangelical Protestants in the millennial generation (born between 1981 and 1996) say homosexuality should be accepted by society.”

It’s probably too simple-minded of me, but gay students who want to avoid years of ugliness could decide to attend schools where they are actually welcome, especially if they’re not going after a degree — like theology — that’s centered on faith. Why spend perfectly good tuition money on a college that thinks you’re a dirty sinner? Isn’t that perpetuating the problem? What am I missing here?

June 24, 2016 Ban on Transgender Military Service Will End July 1
Browse Our Archives
What Are Your Thoughts?leave a comment