Last month, the American Atheists Legal Center heard about how the Harrington Park (New Jersey) Police Department had new magnets on the backs of all their vehicles: 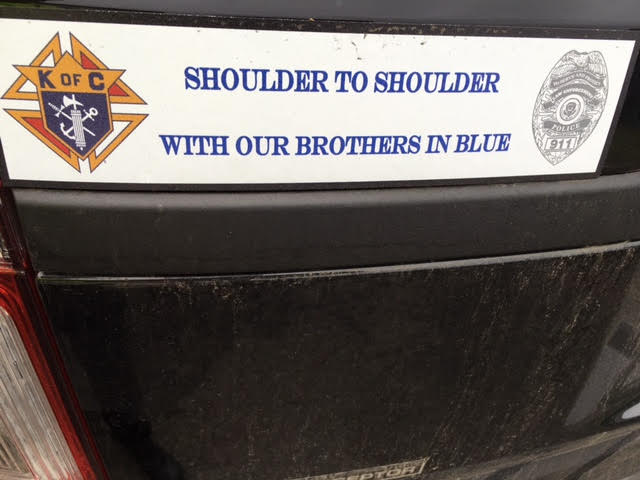 That doesn’t look too bad, right? It’s a magnet from the Knights of Columbus saying they stand “shoulder to shoulder with our brothers in blue.”

But attorney Amanda Knief argued that the Knights of Columbus was an explicitly religious organization. It’s “a Catholic fraternal order, whose founder is currently under review for sainthood by the Vatican,” she wrote in a letter to the department.

Knief asked them to remove the magnets.

An attorney from the department soon responded with a flat-out rejection. He argued that the magnets showed “the Knights of Columbus’ support for the Harrington Park Police, not vice versa.”

Of course, that opens the door for any religious group to promote the police department and get the free publicity that comes from having the cops put their logos on the cars… which is exactly what Knief called for in a response to the department:

After consulting with the Harrington Park resident who made the initial complaint about the police department’s response, the resident has offered to pay for American Atheists to provide magnets of the same size as the Knights of Columbus’ magnets for every Harrington Park police vehicle that will have the American Atheists symbol and the statement “We the People”. The AALC expects this magnet will go through the same approval process that the Knights of Columbus magnet did, which is to say, none.

Last week, those magnets were delivered to the police department with a note from Knief saying that “to refuse to display the stickers from American Atheists would be viewpoint discrimination and discrimination against atheists.”

It’s up the the department to take the necessary steps from this point forward, considering they seem to want to turn their vehicles into religious billboards.

If they don’t do it, a lawsuit could be filed against the department. If you live in the area and would be interested in participating in such a case, American Atheists would love to hear from you.

June 24, 2016 At Evangelical Schools, Why Are Atheists Typically Favored Over LGBT Students?
Browse Our Archives
What Are Your Thoughts?leave a comment