To Christians, From a Christian: Our Collective Homophobia Is Killing People June 23, 2016 Camille Beredjick

To Christians, From a Christian: Our Collective Homophobia Is Killing People

It’s time for Christians to suck it up and get over their faith-based homophobia.

That’s what author Michael Coren writes in a column for the Toronto Star this week; a self-described Orthodox Christian, Coren calls on his fellow people of faith to do more than mourn the victims of the Orlando shooting, but also to actively challenge the tenets of their belief systems that enabled such a massacre. 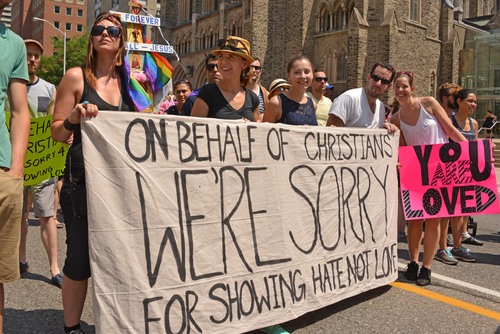 One evangelical pastor in the U.S., for example, recorded a message lambasting those Christians who had described the Florida atrocity as God’s wrath against homosexuals. He was rightly angry and more than 10 million people watched him online, many of them no doubt Christian and probably feeling newly generous and clean in their faith-based kindness.

Sorry, it won’t do. The extreme views aren’t relevant, we can deal with the salivating brutes. No, it’s the more mainstream Christians who are the issue, those otherwise generally good people who continue to condemn homosexuality as sinful, who believe that one can reject same-sex relationships as leading to damnation but still “love” gay people; and as a consequence gay kids kill themselves.

Coren, who is also promoting a new book about his change of heart on marriage equality, writes what we’ve been saying for a long time: thoughts and prayers are not enough. Grief, even public grief, is not enough. You can sympathize with the families of those who were killed, but as long as “love the sinner, hate the sin” rhetoric guides church conversations on homosexuality, rampant homophobes will continue to have their destructive beliefs reinforced. Even passive homophobia can contribute to violent bigotry.

Coren also talks about what it will take for anti-LGBT Christians to make this sweeping change, likening it to Christian acceptance of other religions:

The genealogy of gay suffering has roots deep in church history. Just as Christians have in the past 50 years revised their understanding and attitude toward the Jewish people, the same has to happen with the LGBTQ community. That by necessity will involve contrition, apology and the opening wide of arms, mind and soul. You will be amazed how many gay Christians come forward in glorious liberation, how many loved ones, and how many people previously reluctant to enter a church building. Good God, it could well begin a great, new awakening.

When it comes down to it, Coren says, it will take a lot more than mourning the victims of a shooting to change systems of homophobia. And that will take real work and self-reflection. Here’s the money quote:

Public outrage at a gun massacre is easy, but putting a halt to centuries of harmful teaching is much more difficult and in many ways much more significant.

He nailed it. Sadness and outrage aren’t transformative reactions to the Orlando shooting; they’re basic human responses. Even speaking out against those extremists who say we deserved the massacre isn’t enough; again, it’s the decent thing to do.

In order to address the attitudes that enable mass shootings like Orlando’s, we need Christian allies to show up by challenging the day-to-day homophobia that starts in the pews, on FOX News, and at their dinner tables. It’s time for anti-LGBT Christians to acknowledge how they contributed to this tragedy — and for quietly supportive Christians to examine whether they’re enabling this toxicity with their silence — and to take real steps to make sure it never happens again.

(Image via Paul McKinnon / Shutterstock.com. Thanks to Jay for the link)

June 23, 2016
After a Newborn Gets Whooping Cough, Her Mom Urges Parents To Get Their Kids Vaccinated
Next Post