LGBT people have a complicated relationship with the police, to say the least. So it’s reasonable that some of them might not be thrilled with a statement from New York City Police Commissioner Bill Bratton about the Stonewall Riots. 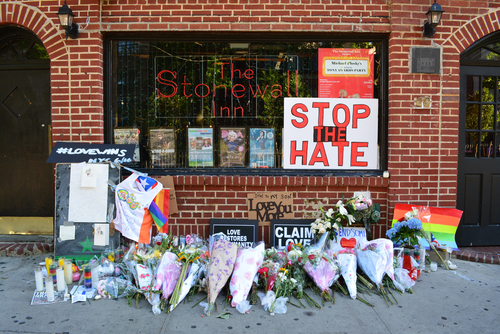 In a press conference, Bratton spoke about the plan to increase police presence at this weekend’s Pride festivities, a controversial measure put in place as a result of the Orlando shooting. But when asked whether LGBT people deserved an “apology” from the police for the events that occurred during the Stonewall Riots of 1969 — when police violently raided a gay bar called the Stonewall Inn, assaulted many patrons, and set the stage for the revolt that sparked the modern LGBT rights movement — he said no.

“There’s no doubt denying that out of that terrible experience came so much good, that it was the tipping point,” Bratton said at a press conference at an LGBT center this morning. “An apology, I don’t think that’s necessary. The apology is all that’s occurred since then.”

It’s hard to tell what Bratton means by “all that’s occurred since then” — conditions have certainly improved for LGBT people over the last 40-something years, but the police haven’t necessarily been helpful. In fact, law enforcement and other public officials are often complicit in violence against LGBT people, which is why it’s generally not a good idea to center them in the response to a tragedy like Orlando:

When Bratton took the stage at a vigil held at the Stonewall Inn last week, he was met with plenty of boos from the crowd — as was Mayor Bill de Blasio. Asked about that today, de Blasio correctly noted the crowd had grown tired of hearing speeches (they were the last to talk) and wanted to hear the names of the Orlando victims.

The mayor said he didn’t take the boos personally and that he was pleased with the city’s relationship with the LGBT. He pointed to evidence of change, including an NYPD vehicle outside painted in rainbow pride colors.

“In 1969, not that long ago,” de Blasio told the Observer, “that would have been so inconceivable there are no words in English for it.”

Rainbow-colored police vehicles aren’t enough for all LGBT people to believe law enforcement is on their side, though. In a 2015 report, the Williams Institute gathered data from multiple studies showing trends in police violence, discrimination and hostility towards LGBT people.

In one survey focusing on LGBT people and people with HIV, 73% of respondents had had face-to-face contact with the police in the past five years, and of those, 21% experienced hostile attitudes from officers. In another survey, 48% of LGBT respondents who interacted with the police had experienced police misconduct. And in a third, 40% of gay and bisexual men said they felt contacting the police during an incident of domestic violence wouldn’t help the situation.

Despite the threat of violence, from police or otherwise, David Studinksi, co-chair of NYC Pride, says LGBT people should attend Pride this year anyway.

This year’s pride march is expected to be the largest in history, and will include programming to honor those killed in Orlando. It’s also likely that many present will call for gun control measures as the LGBT community moves to embrace that cause.

Studinksi said he understood if some in the community were nervous — but urged them to come out to the parade.

There’s no way to say what LGBT people should or shouldn’t do after Pulse; the surroundings that make some of us feel safe might make others feel targeted. But it’s more important than ever for law enforcement officials to recognize what measures are helpful and which have the opposite effect.

June 23, 2016 Pat Robertson: God Will Eventually Punish Us For Our Satanic Abortion "Holocaust"
Browse Our Archives
What Are Your Thoughts?leave a comment