Pat Robertson: God Will Eventually Punish Us For Our Satanic Abortion “Holocaust”

On The 700 Club this week, Pat Robertson talked about the inevitable wrath we’ll incur from God for legalizing abortion.

Though if God is only now getting around to punishing us for something that’s been legal nationwide for more than four decades, should we really be worried? He’s clearly disorganized. 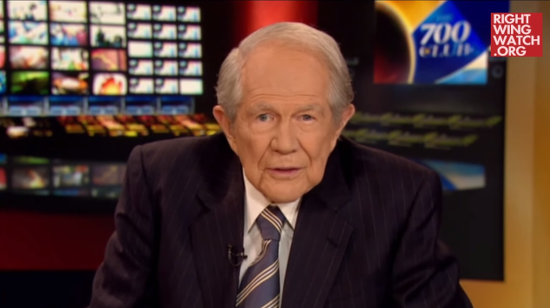 Robertson said that “we have to look at the spiritual roots” of abortion rights, blaming the right to abortion on Satan: “The enemy of our soul is Satan and he hates people, he hates human beings, and the idea is if humans can kill other humans, the devil wants to do everything to help it.”

“It’s a shocking holocaust,” he said. “And we as Americans seem to think it’s okay. Well, it’s not okay. And one day, a righteous, holy God is going to demand an accounting for every drop of blood that has been spilled of innocent, unborn babies. And we just keep it mind, when it happens it’s going to be awful.”

Tell you what: I’ll start worrying about all that after Jesus comes back to say hello to his friends. Until then, I’ll proudly support laws that give women autonomy over their own bodies.

June 24, 2016 The Woman in the Moon Has Been Revealed
Browse Our Archives
What Are Your Thoughts?leave a comment