In the aftermath of the shooting that took 49 lives at an Orlando gay nightclub, dozens of diverse organizations are affirming the importance of unity, respect, and love. 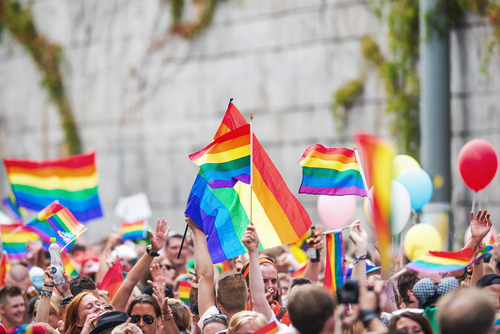 Nearly 70 Muslim, LGBT, and other organizations have signed and released a “Unity Statement” urging communities from all walks of life to work together in the fight against bigotry and hatred of all kinds. Among the signatories were groups such as the Human Rights Campaign, Muslim Public Affairs Council, the ACLU LGBT Project, the Universal Muslim Association of America, GLAAD, and PFLAG National.

Here’s an excerpt from the statement:

As members of the LGBTQ and Muslim communities in America, we are joined in solidarity, grief and outrage at the horrific attack that unfolded in Orlando on June 12. Our hearts, our thoughts and our prayers are with the victims, their families and the LGBTQ communities, particularly LGBTQ Latino communities.

In this moment of immense sadness and outrage, we stand together united against fear, hate and violence. We will not lose hope in the people and communities around us because we know we are stronger together.

In standing together, hand in hand, across every faith, we send a powerful message to those who seek to divide us using hatred and violence: love is stronger than hate and hope will defeat fear.

After it came to light that the shooter, Omar Mateen, “pledged his allegiance to the Islamic State” before the attack, a new wave of anti-Muslim rhetoric spewed from many different sources, blaming the attack solely on “radical Islam” and using the tragedy to promote hateful political goals:

The country witnessed a fair share of divisive rhetoric in the days following the shooting, which left 49 dead and 53 others injured. Republican presidential hopeful Donald Trump chose to leverage the tragedy by reinforcing his proposal to ban Muslims from entering the U.S. He also accused President Barack Obama of sympathizing with the shooter, who reportedly pledged his allegiance to the Islamic State in a call with police during the shooting.

Many Muslim Americans feared backlash after the shooting, though religious leaders from different faiths urged the American public not to blame the actions of one sick individual on an entire faith.

Many community activists, too, have reminded the public that LGBT Muslims exist and shouldn’t have to face dual prejudices for their identities:

In the days ahead there will be more calls to define an enemy. There will be cynical efforts to pit groups of Americans — many of whom share a history of being victims of suspicion and discrimination — against one another and to increase surveillance of entire communities, based solely on how they look or how they pray.

We stand united against these efforts to divide us. We are reminded that as our communities stand together, we are in fact one community – which includes LGBTQ Latinos and LGBTQ Muslims, who are targeted both as Muslims and as members of the LGBTQ community.

Now is the time for people of all faiths, sexual orientations, gender identities, and backgrounds, to come together and refuse to allow this tragic act of violence and hate to divide us.

Now is the time to put aside our differences, identify what needs to change, and get to work; we can’t wait any longer. Kudos and thanks to these groups for setting the precedent.