There are plenty of reasons to criticize Pastor Joel Osteen. He’s a rich televangelist who stays above the fold by just ignoring every controversial issue. He’s “Christianity lite,” a guy who cares more about self-help than sin. He preaches the Prosperity Gospel. He sells boatloads of books that are, on the surface, more about him than his religion. He’s not exactly what Jesus had in mind.

But is that reason enough to interrupt his sermons?

Last year, six men who belong to the Church of Wells walked into Osteen’s Lakewood Church and attempted to shout him down as he delivered a sermon. They did it multiple times before security escorted them away. And they did it, they said, because God wanted them to.

The men were charged last June with trespassing and disrupting Sunday services at Lakewood Church.

“We are unashamed of the Gospel. We are willing to suffer, we are willing to go to jail, or anything,” said Church of Wells member Kevin Fessler. “By God’s grace, God was with us.”

Church members said they spoke out during Pastor Joel Osteen’s service last year because they believe he is spreading a false message.

“He is a false prophet and he preaches a prosperity message that does not turn the people from their sins,” said Fessler.

It’s a dick move that no performer — comedian, pastor, speaker, anyone — deserves. Let the audience enjoy the show they came to see. There are more productive ways of voicing your disagreements than interrupting the performance, no matter what the voices in your head are telling you to do.

Yesterday, four of those men were let completely off the hook: 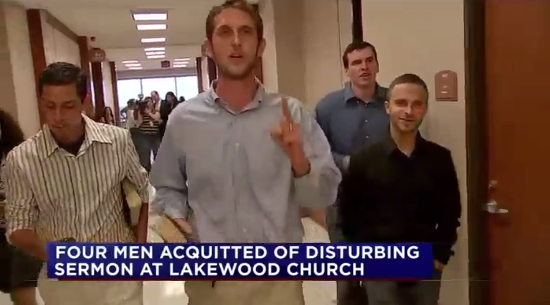 Attorneys for the men persuaded the judge to dismiss the trespassing charges. The jury found Fessler, Mark DeRouville, Randall Valdez and Matthew Martinez not guilty of disrupting a public meeting.

Attorneys for the men argued they were exercising their First Amendment rights to free speech by expressing a religious opinion and the disruption was an unintended side effect.

When I first read about the decision, it seemed disappointing because it gave license to more people to interrupt church services (or atheist gatherings, for that matter) and claim they have a First Amendment, God-told-me-to right to do it. Which, of course, they do… but there’s no doubt that would ruin the experience for everyone else.

On the other hand, there’s not much of a difference between heckling Osteen and, say, Donald Trump at one of his rallies. We’ve seen plenty of protesters do it — and maybe even cheered them on.

It’s just the price of doing business when you support free speech.

(Thanks to Hidai for the link)

June 23, 2016
Majority of LGBT People In London Are Still Too Scared to Come Out
Next Post

June 23, 2016 Pennsylvania Priest Accused of Groping Pre-Teen Girl At Her Holy Communion Party
Browse Our Archives
What Are Your Thoughts?leave a comment