Why Is Grandma Talking To Her Food? How to Explain Prayer to Children June 22, 2016 Hemant Mehta

Why Is Grandma Talking To Her Food? How to Explain Prayer to Children

David McAfee, the author of several books about faith and atheism, has teamed up with writer and illustrator Chuck Harrison for a new project introducing religion to children.

The Book of Gods offers an objective take on what people believe and why they believe it. 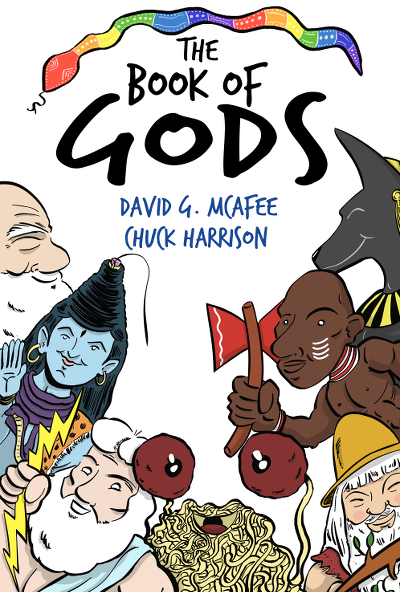 In the excerpt below, the authors explain prayer to kids who might not be familiar with the concept:

We all do some strange, silly things. But when a lot of people do the same strange thing, it is seen as normal — like singing in the shower or talking to yourself when there’s no one else in the room. Can you think of a time when you’ve seen or done anything like this? I bet you can!

I bet you’ve even seen people talking to their food, too. Do you know why someone would do that? Maybe they think it’ll make the dinner taste better? Well, believers don’t see it that way. They will probably say they are talking to a god or that they are thanking a deity for what they are going to eat.

This kind of talking even has a name; it’s called prayer.

Dave and Chuck don’t say prayers because they don’t believe in gods, but they also understand why believers do pray. The world is difficult, and conflicts seem easier to handle when you believe there’s someone looking out for your wishes.

Believers might say they are praying, but what do you see when you look over at your family members as they get ready to eat a big Thanksgiving dinner? You see them mumbling quietly to their meal. But because most people believe in gods and most people pray, nobody thinks this is weird at all!

Ever since people started believing in gods, they’ve been talking to them (or at least trying to). Most early believers made statues or “idols” of their gods and talked to them. They even gave these statues food and drinks and hoped the gods would bless them and their lands — something that many people still do today!

But you know a god didn’t give that food to your family, don’t you? Maybe you were at the store when they bought the groceries or you remember your parents working hard to get the money for them. Was there a god going to work every day? Do gods do your food shopping?

People do this with other things, too. When grandpa has a friend who’s sick and he doesn’t think he can do anything to help, he might ask for help from his god(s). When your aunt is angry with someone and does something mean to them, you guessed it, she might ask her god(s) to forgive her for acting like such a bad person. And the only way believers can ask for those things, the only way they can talk to a god, is to pray.

Now that you know all about prayer, you won’t be confused when you see it. But not everyone prays, and not everyone believes in gods. You’ll learn more about non-believers in the next chapter!

The Book of Gods is now available on Amazon.

June 22, 2016 An Interview with John W. Loftus, Who Escaped Faith and Now Helps Others Do the Same
Browse Our Archives
What Are Your Thoughts?leave a comment