George Takei Will Proudly Pee Next To Trans People

Activist, Star Trek actor, and all-around hero George Takei has again demonstrated what it means to support a community.

This time, Takei is standing up for transgender people by creating a shirt that says “You Can Pee Next To Me.” It’s a message calling out North Carolina’s anti-LGBT HB2 and other laws that restrict transgender people’s access to affirming bathrooms. 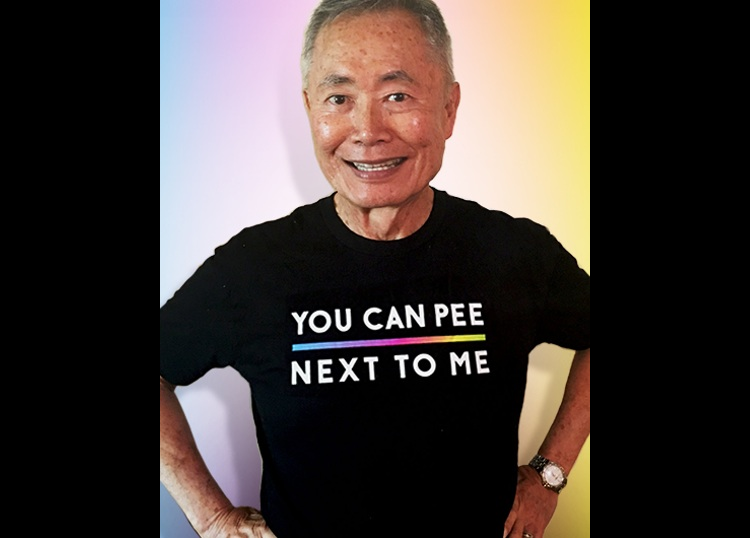 “If you show your support with one of these shirts, well, urine my good graces,” the actor said on the shirt’s

Takei is not an atheist — he’s a “longtime Buddhist” who’s also a vocal opponent of religious-based discrimination (and any other kind, for that matter). He’s known for charming the internet with memes and political posts alike. And as an openly gay, married man famous for his role on a classic science-fiction show and his background in human rights, he generally knows what he’s talking about.

Takei has become a leading activist in recent years.

His activism ranges from raising over $150,000 for a Broadway play about Japanese internment to hilariously calling out Tennessee lawmakers for erasing LGBTQ history. He always manages to prove his point while making people laugh.

As Takei’s T-shirt website states: “If you’re going to take a stand against discrimination, you might as well look good while you do it, right?”

The shirts cost $25 apiece, and all proceeds benefit Equality North Carolina, the state LGBT group leading the charge against HB2. An important cause, a fashion statement, AND a pee pun?! Oh, my!