Boston College Philosophy Professor Peter Kreeft, in a video for “Prager University,” claims that atheists should want God to exist. 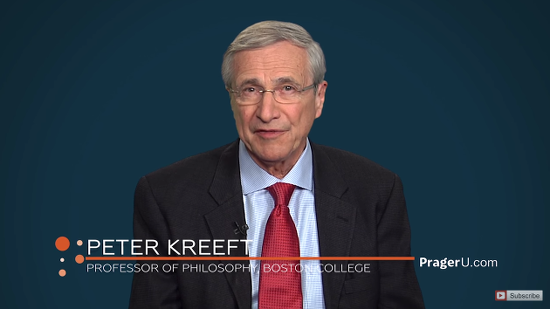 Let’s run through some of his key arguments and talk about why they make no sense:

We should want God to exist because only then does everything make sense.

All the evil in the world would seem barbaric if God didn’t exist, Kreeft suggests, before claiming with complete certainty that all of these twists and turns of life always lead to a happy ending in the afterlife.

But this is just wishful thinking on his part. Yes, it gives gullible people comfort to think that their loved ones died as part of God’s Master Plan (which always ends well) instead of a preventable disease or tragic accident or old age. Otherwise, humans might be responsible for fixing problems of our own creation.

When you believe what Kreeft does, however, it’s all the more reason not to take action on gun safety measures or climate change. When you believe God has everything in control, you’re removing yourself from the chain of responsibility. It’s negligence, really, to say God will take care of our issues.

We should want God to exist because only then would morality be objective.

Kreeft says that, without God, we’re making the rules up as we go along! But that’s exactly how we’ve always done things. What justified today may be considered immoral in the future, and that’s a sign of a progress. We don’t always get things right, but we can improve.

Christians have used the Bible to justify slavery, sexism, and all shades of bigotry. And it is always defended using God’s Word. The Bible is no more objective on these issues than society is. I want to live in a world where we can learn from our mistakes and get better, not adhere to a set of arbitrary rules (depending on which Christians you talk to) that never takes into account our own education on various matters.

We should want God to exist because love would just be “chemical interactions” otherwise.

Our whole existence is a series of chemical reactions, but we have a mind and a conscience and we make our own decisions. Choosing someone to dedicate yourself to and stand by, no matter what’s happening in your lives, is an incredible sentiment. The existence of God wouldn’t make that any more special, and the lack of a God doesn’t take away from its beauty.

We should want God to exist because he makes us feel significant.

Richard Dawkins put this perfectly many years ago when he wrote about how, despite how insignificant we may be in the grand scheme of the universe, we are unique and meaningful:

We are going to die, and that makes us the lucky ones. Most people are never going to die because they are never going to be born. The potential people who could have been here in my place but who will in fact never see the light of day outnumber the sand grains of Arabia. Certainly those unborn ghosts include greater poets than Keats, scientists greater than Newton. We know this because the set of possible people allowed by our DNA so massively exceeds the set of actual people. In the teeth of these stupefying odds it is you and I, in our ordinariness, that are here.

We should want God to exist because it means we can conquer death.

This, once again, is wishful thinking. We have a finite time on this planet, whether we like it or not. As much as we may wish to be immortal, there’s no proof of an afterlife or Heaven or Hell or purgatory or anything else that suggests we will never die.

The only way to conquer death is to leave a meaningful legacy while we’re alive — to love people and contribute to society in a way that future generations will think about you.

Kreeft ends the video by talking about Pascal’s Wager (a.k.a. the laziest, worst argument Christian apologists have at their disposal). He also brings up studies that show people who believe in God are happier and have longer life expectancies — without mentioning that those results have everything to do with being part of a tight-knit community and nothing to do with actual belief in God. Religious people have access to those communities; non-religious people have to create their own.

After all that, would I want God to exist? Not a chance. If the way Christians act is any indication, God’s judgment has been pretty damn awful so far. Adding God to our already volatile world would only make things worse. I’ll take humans, warts and all, over a God who dictates how we live through His capricious, irrational whims.

At least we can always get better.

If there was proof of his existence, of course, we’d have to accept that. But given the choice, you’d have to be completely incapable of being a decent human being in order to want God around to protect you from yourself.

I can handle myself just fine without supernatural intervention, thank you very much.

June 22, 2016
Charlotte-Mecklenburg Schools Will Let Transgender Students Use the Bathrooms of Their Choice
Next Post