Anytime there’s a highly-publicized funeral, you can bet that the Westboro Baptist Church, one of the most vitriolic anti-LGBT groups around, will be there spewing bigotry and hatred. Such was sadly the case at some of the funerals of victims of the Orlando massacre.

But last weekend, when funerals began taking place for victims, members of the community came prepared for protests. Members of the Orlando Shakespeare Theater gathered volunteers to wear handmade angel wings, which spread several feet wide, to keep protesters out of sight and leave mourners in peace. 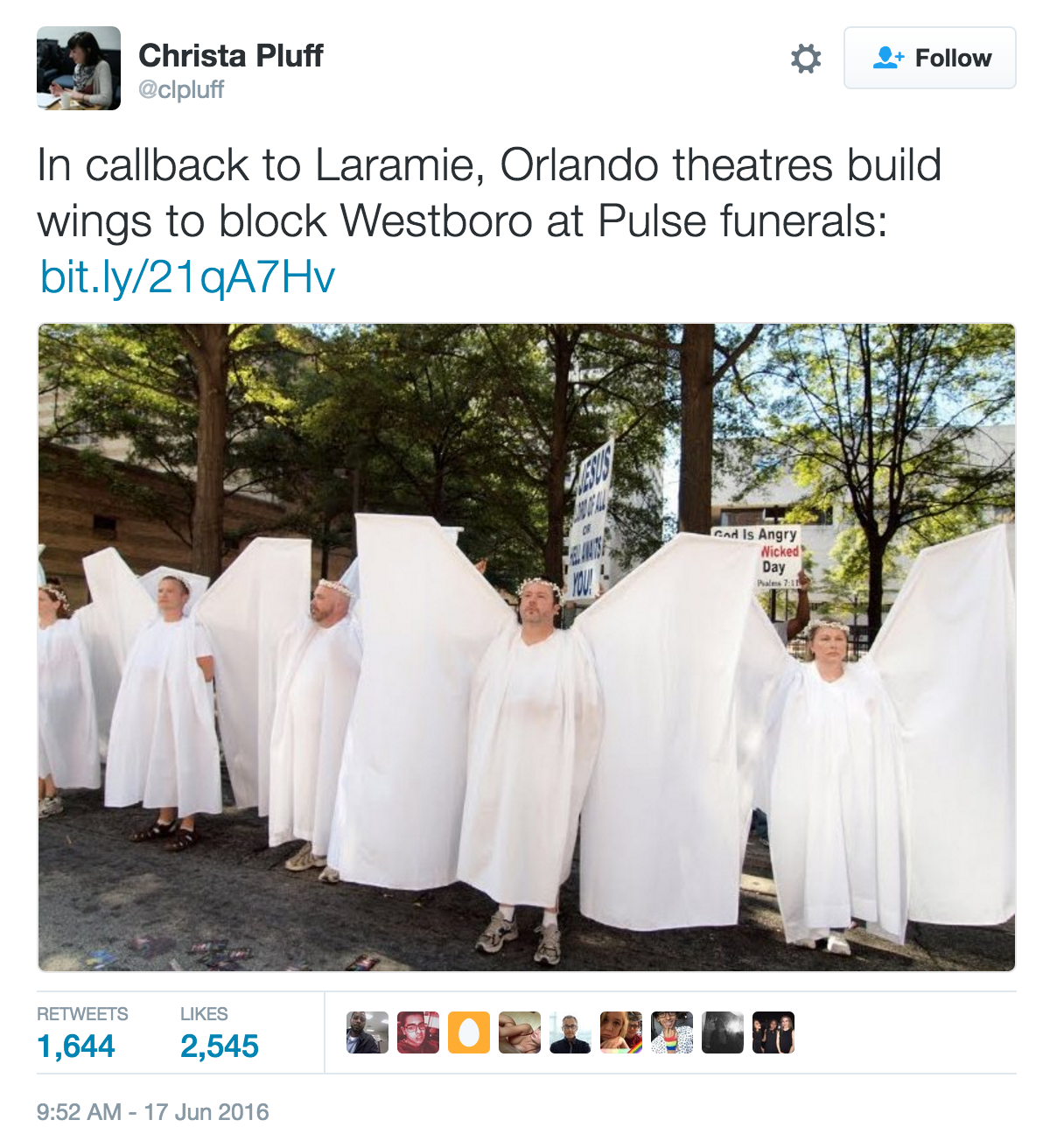 “We didn’t know that anyone would protest the funerals here in Orlando, but that is now happening, so a counter-protest so that people that are attending those funerals and those that are in mourning don’t have to deal with hate is an important thing,” Orlando Shakespeare Theater’s Jim Helsinger told the Miami Herald.

“I don’t have any money to give, but I can spread love and I can spread hope,” volunteer Jeannie Haskett told the Herald as she pieces together the wings. “I was just waiting for an opportunity to use one thing I do have, which is the skill to sew.”

The visual display of angel wings at funerals dates back almost two decades, when Matthew Shepard, a gay man, was murdered in a brutal hate crime that dominated national news for months. Westboro protested at his funeral in 1998 and announced they would do the same at the murder trials for his killers in 1999. That’s when Romaine Patterson, a friend of Matthew’s, had the idea to form a human chain of counter-protesters to keep hateful church members away from his grieving family.

Before you stands a band of angels. They come from a number of backgrounds: they don’t represent any one group; they don’t represent any one religion, sex, race, age, or sexual orientation. They are merely a group of people who joined with me because they believe in honesty and truth. So often we find that people are willing to make a lot of noise about what they believe to be true. We don’t believe that we have to say anything at all. Aside from this brief explanatory statement, our actions will speak for themselves. Just one look and the truth is plainly clear. Our focus is to bring forth a message of peace and love. Hatred is running rampant through our everyday lives. But as a group, we choose to lift ourselves above that hatred. We feel as so many others do, that love and compassion for our community and our humanity are the answers that so many people are desperately searching for.

Lifted up by decades of powerful history, hundreds of volunteers came forth to wear the wings in Orlando this weekend; only a handful of protesters showed up to picket, and they left quickly. We may never stop grieving the 49 people who died in this hateful act, but beautiful displays like this one show just how much love is out there for the victims, their families, and their community.