Tony Perkins: Donald Trump Isn’t “Hostile” to Christianity (Unlike the Christian President, Who Is)

In anticipation of Donald Trump‘s meeting today with hundreds of conservative Christians, Christian hate-group leader Tony Perkins appeared on Fox Business Network to talk about his goals for the gathering.

Along the way, he claimed that the Obama administration “has declared war on the Christian religion.” Which is news to those of us who live in reality. 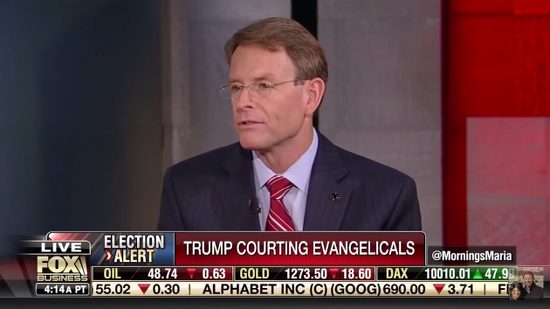 Maybe most telling, Perkins was asked whether he believed Trump was a religious man.

Perkins hesitated for a bit before responding:

Well, you know, Scripture makes very clear that you cannot know the heart of another man. You look at how they live their lives. This is what I see in Donald Trump, is he’s not hostile toward religion. He’s certainly not hostile to the Christian faith…

How’s that for hypocrisy? Obama cites Scripture frequently and talks openly about his faith, but he’s the bad Christian. He’s the guy who’s hostile to Christianity.

Trump, who’s clearly never thought about Jesus a day in his life, is the Great White Christian Hope.

No wonder people with no religious affiliation is the fastest growing faith demographic. If people like Perkins represent evangelical Christianity, they have a serious credibility issue.

June 21, 2016
Property Owners to Christian Hate-Pastor: If You Break Your Lease Early, We'll Waive the Penalty
Next Post